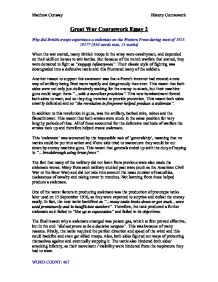 Great War Coursework Essay 2 Why did British troops experience a stalemate on the Western Front during most of 1915-1917? (450 words max, 15 marks) When the war started, many British troops in the army were cavalrymen, and depended on their skill on horses to win battles. But because of the trench warfare that started, they were demoted to fight as "stopgap infantrymen". Their classic style of fighting was downgraded into a defensive tactic and this frustrated many of the soldiers. Another reason to support this statement was that a French inventor had created a new way of artillery being fired more rapidly and dangerously than ever. ...read more.

This meant that both armies were stuck in the same position for very lengthy periods of time. All of these accounted for the defensive methods of warfare the armies took up and therefore helped create stalemate. This 'stalemate' was worsened by the impossible task of 'generalship', meaning that no tactics could be put into action and if one side tried to manoeuvre they would be cut down by enemy machine guns. This meant that generals ended up with the duty of hoping to "...breakthrough using brute force". The fact that many of the military did not learn from previous wars also made the stalemate worse. ...read more.

Therefore, the tank produced a further stalemate as it failed to "live up to expectation" and failed in its objectives. The final reason why a stalemate emerged was poison gas, which at first proved effective, but in the end "did not prove to be a decisive weapon". This was because of many reasons. Firstly, the tactic required the perfect direction and speed of the wind and this could backfire and even get allied troops. Also, both sides figured out ways of protecting themselves against and eventually stopping it. The tactic also hindered both sides' attacking infantry, as their movement / visibility were hindered from the respirators they had to wear. ?? ?? ?? ?? Matthew Conway History Coursework WORD COUNT: 467 ...read more.