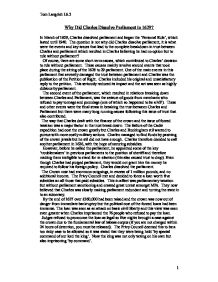 Why Did Charles Dissolve Parliament in 1629?

Why Did Charles Dissolve Parliament in 1629? In March of 1629, Charles dissolved parliament and began the 'Personal Rule', which lasted until 1940. The question is not why did Charles dissolve parliament, it is what were the events and key issues that lead to the complete breakdown in trust between Charles and parliament which resulted in Charles believing he had no option but to rule without parliament? Of course, there are some short-term causes, which contributed to Charles' decision to rule without parliament. These causes mainly revolve around events that took place during the sitting of the 1628 to 29 parliament. One of the main events in this parliament that severely damaged the trust between parliament and Charles was the publication of the Petition of Right. Charles included his original and unsatisfactory reply to the petition. This seriously reduced its impact and the act was seen as highly dubious by parliament. The second event of the parliament, which resulted in relations breaking down between Charles and Parliament, was the seizure of goods from merchants who refused to pay tonnage and poundage (one of which so happened to be a MP). These and other events were the final straw in breaking the trust between Charles and Parliament but there were many long running causes following this issue of trust that also contributed. The way that Charles dealt with the finance of the crown and the issue of forced taxation was a major factor in the trust ...read more.

This is so because the commons wanted someone to blame for the disasters in foreign policy and who better to blame than the Lord Admiral, Buckingham. After the first accusations against Buckingham were made, Charles warned parliament that parliaments were under his power. The present parliament took little notice and made moves to have Buckingham impeached. Charles again took the attack personally and dissolved parliament to bring an end to the impeachment. Charles had sacrificed trust between him and his parliament for the sake of a friend. Buckingham then contributed again to the disintegration of trust by making a series of political moves, which would in turn remove opposition from the Privy Council. This was seen as a further step towards an autocracy. Buckingham was also blamed for the poor discussions over the Petition of Right and one MP went as far as to say 'Buckingham is the cause of all our miseries'. Parliament also said that the failures of Buckingham's foreign policy were a judgment from God. In 1628, a man named Felton assassinated Buckingham. Even after his death, Buckingham stil managed to sour relations because Charles blamed parliament for Buckingham's death. This is so because Felton said he had drawn inspiration from parliaments view that Buckingham was the cause of the nations problems. I believe that Buckingham was the principal cause of trust collapsing between parliament and Charles. ...read more.

This gave Sir John Eliot time to call out three resolutions. They stated that any one who promoted Armenianism or church innovation was a 'capital enemy of the state' as well as any one who counselled the collection of tonnage and poundage without parliament or any one who paid it. These three resolutions finally linked the two main issues that had caused the complete and utter breakdown of the working relationship between Charles and Parliament: Religion and finance. I believe that the Armenian issue is on a par with the breakdown of trust as to why Charles dissolved parliament in 1629. This is so because religion was an issue that was very important in 17th Century England and because Charles and Parliament had such contrasting views, it provided a fundamental disagreement, which would hinder their working relationship. Also it prompted one of the three resolutions which would have made Charles not want to recall parliament after 1629. To conclude a mixture of reasons resulted in Charles dissolving parliament in 1629. These reasons can be split into two main groups: those of trust and those of politics/religion. The political issues all came together in the three resolutions, which affectively brandished Charles a 'capital enemy of the state'. The issues of trust were continuous and would have only caused the working relationship to decrease to a point where Charles and Parliament could no longer work together. One of them would have to go. Tom Langrish L6.2 1 ...read more.