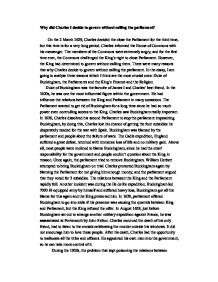 Why did Charles I decide to govern without calling the parliament?

Why did Charles I decide to govern without calling the parliament? On the 2 March 1629, Charles decided the close the Parliament for the third time, but this time is for a very long period. Charles informed the House of Commons with his messenger. The members of the Commons were extremely angry, and for the first time ever, the Commons challenged the King's right to close Parliament. However, the King had determined to govern without calling them. There were many reasons that why Charles decide to govern without calling the parliament. In the essay, I am going to analyse three reasons which I think are the most crucial ones: Duke of Buckingham, the Parliaments and the King's Finance and the Religion. Duke of Buckingham was the favorite of James I and Charles' best friend. In the 1620s, he was one the most influential figure within the government. He had influence the relations between the King and Parliament in many occasions. The Parliament wanted to get rid of Buckingham for a long time since he had so much power even controlling access to the King. Charles saw Buckingham really important. ...read more.

The King desperately needed money for the war expense; he kept calling the parliament for voting him subsidies. The King had 12 subsidies from the parliament during his reign which was biggest amount in the history of England. Two famous cases about Charles' financial problem and how he got the money were the Forced Loan and Tonnage and Poundage. During the war with France, Charles was unfit to handle foreign policy became more common than ever. At the same time, the government's need to raise money became more desperate than ever. Having failed to get any subsidies out of the Parliament of 1626, Charles introduced the Forced loan. There was no intention of ever repaying the money, but the use of the 'loan' helped the government to pretend it was not raising a tax without Parliamentary consent. Forced loan was paid by the gentries, aristocracies, local government officials, and collected by the same people. If people failed to pay the loan, they would be sent to prison. There was an incident that five knights refused to pay the money and they were imprisoned. At the same time, Charles was also getting unauthorised tonnage and poundage. ...read more.

William Laud, later Archbishop of Canterbury, and Richard Neile, later Archbishop of York, were made members of the Privy Council. So the King had the control of English Churches. At the same time, the Arminians were gaining control of the censorship. In the middle of Parliament's attack on Buckingham, he was made the Chancellor of Cambridge University, and this office gave him control over the work of the Cambridge press. William Laud had controlled the press of London. The King gained full control of the press in England after Pembroke's death and Laud succeed his place as Chancellor of Oxford. At the same time, some of the Arminian clergy were doing more than anyone else to give the King public support over the Forced Loan. It was this time that many people decided that the religious changes and the issues of taxation were two parts of the same argument. If Charles wanted to set up a new religion, which Parliament would not support, he would need to rule without Parliament. If he was to do without Parliament, he would have to be able to raise taxes without the consent of Parliament. It was this time that many people think the illegal taxes rather than forced loan, were part of a plot to destroy the religion and liberties of England. ...read more.