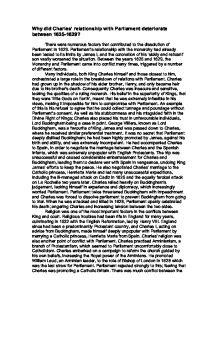 Why did Charles' relationship with Parliament deteriorate between 1625-1629? There were numerous factors that contributed to the dissolution of Parliament in 1629. Parliament's relationship with the monarchy had already been tested to its limits by James I, and the coronation of his 'sickly and reticent' son vastly worsened the situation. Between the years 1625 and 1629, the Monarchy and Parliament came into conflict many times, triggered by a number of different factors. Many individuals, both King Charles himself and those closest to him, orchestrated a large role in the breakdown of relations with Parliament. Charles had grown up in the shadow of his elder brother, Henry, and only became heir due to his brother's death. Consequently Charles was insecure and sensitive, lacking the qualities of a ruling monarch. His belief in the superiority of Kings, that they were 'little Gods on Earth', meant that he was extremely inflexible in his views, making it impossible for him to compromise with Parliament. An example of this is his refusal to agree that he could collect tunnage and poundage without Parliament's consent. ...read more.

Parliament twice threatened Buckingham with impeachment and Charles was forced to dissolve parliament to prevent Buckingham from going to trial. When he was attacked and killed in 1628, Parliament openly celebrated his death; angering Charles and increasing tension between the two sides. Religion was one of the most important factors in the conflicts between King and court. Religious troubles had been rife in England for many years, culminating in 1532 with the English Reformation, led by Henry VIII. England since had been a predominantly Protestant country, and Charles I, acting on advice from Buckingham, made himself deeply unpopular with Parliament by marrying a Catholic princess, Henrietta Maria from Spain. Charles' religion was also another point of conflict with Parliament. Charles practised Arminianism, a branch of Protestantism, which seemed to Parliament uncomfortably close to Catholicism. Charles embarked on a campaign to reform the church guided by his own beliefs, increasing the Royal power of the Arminians. He promoted William Laud, an Arminian leader, to the role of Bishop of London in 1628 which was the last straw for Parliament. Parliament rejected strongly to this; fearing that Charles was promoting a Catholic Britain. ...read more.

However a year later in 1628, in the middle of war Charles once again became desperate for money and was forced to call a new Parliament. The new Parliament presented Charles with a list of grievances, known as the Petition of Rights, and stated that they would not proceed unless the King accepted the rules lay out. Charles had no other option than to agree, strengthening his resolve against Parliament. There are many factors involved in explaining the conflict between Monarchy and Parliament, and each has an important role in the deterioration of their relationship. However in my opinion religion was the main catalyst for the breakdown of Parliament in 1629. Religion was the governing part of most people's lives in the 17th century, and had been the cause of conflict for centuries beforehand. The hatred of Catholics in Britain was widespread, and the anger and fear about Charles' Arminianism and his Catholic wife was an extremely important factor. Parliament feared that England would become a Catholic country under Charles; Catholicism for many people was synonymous to absolute monarchy and despotism, and so understandably this was the root of the tense relationship between the two groups. ?? ?? ?? ?? ...read more.