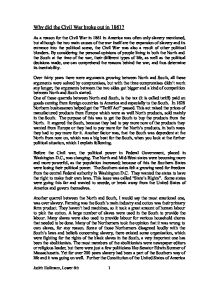 Why did the Civil War broke out in 1861? As a reason for the Civil War in 1861 in America was often only slavery mentioned, but although the two main causes of the war itself are the expansion of slavery and its entrance into the political scene, the Civil War was also a result of other political blunders. By considering the personal opinions of people living in both the North and the South at the time of the war, their different types of life, as well as the political decisions made, one can comprehend the reasons behind the war, and thus determine its inevitability. Over thirty years there were arguments growing between North and South, all these arguments were solved by compromises, but with the time compromises didn't work any longer, the arguments between the two sides got bigger and a kind of competition between North and South started. One of these quarrels between North and South, is the tax (it is called tariff) paid on goods coming from foreign countries to America and especially to the South. In 1828 Northern businessmen helped get the "Tariff Act" passed. This act raised the prices of manufactured products from Europe which were as well North products, sold mainly in the South. The purpose of this was to get the South to buy the products from the North. ...read more.

Further the Constitution of the United States of America allowed the Southerners to own slaves. The Constitution guaranteed the right to own property and protected against seizure of property and a slave counted as property. The Southern States did not like to be told from the Northern States that owning slaves was a great wrong. The Southerners felt directly attacked, because it was a major part of the way of Southern life and represent it as well. So the Southerners felt that what is representing them was fought. Another aspect about the out broke of the Civil War, was the publishment of the book "Tom's Cabin" from Harriet Beecher Stowe on 20th March 1852. It is about a life of a slave, Tom, in the South, it is written in a negative way about the slave owning in the South. It is attacking the South again, very successful. This book became a sort of bible for the abolitionists. The public caught it up, and in a few days ten thousand copies were in the hands of eager reader. Before the year was put, three hundred thousand copies had been sold. The book has been very important in the pre-Civil-War time and strengthen the conflict. When Abraham Lincoln met the author Harriet Beecher Stowe, he is reported to have said "So this is the little lady that started that big war!" ...read more.

On the Southern side there were Rhett and Yancey, who were willing to make war to guarantee the propagation of their "right" to own slaves, On the Northern side there were abolitionists like John Brown and Henry Ward Beecher who were willing to make war in order to put an immediate end to the institution of slavery. These leaders through their words or actions were able to convince the majority that it was necessary to got to war. So - was the war absolutely about slavery? Yes it was, but not only about slavery, the Civil war was caused by a myriad of conflicting pressures, principles, and prejudices, fuelled by sectional differences and pride, and set into motion by a most unlikely set of political events. The arguments , which were growing over all these years and the not understanding between the North and South for their different ways of life, combined and created a big muddle of anger, misunderstanding and the will of succeed over each other. So it was just a question of time until the South secedes from the United States. Because of the election of Abraham Lincoln in 1860, the stowed anger of the Southern states exploded and the war started. The election was just the catalyst for the arguments I have mentioned above. 1 Judith Hollmann, Lower 6th ...read more.