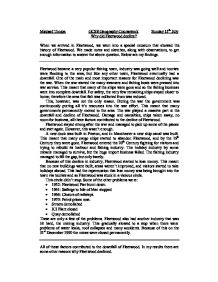 Why did Fleetwood decline?

Michael Thorpe GCSE Geography Coursework Sunday 15th July Why did Fleetwood decline? When we arrived in Fleetwood, we went into a special museum that showed the history of Fleetwood. We made notes and sketches, along with observations, to get enough information to answer the above question. Below are my findings. Fleetwood became a very popular fishing town, industry was going well and tourists were flocking to the area, but like any other town, Fleetwood eventually had a downfall. One of the main and most important reasons for Fleetwood declining was the war. ...read more.

This meant that many governments permanently moved to the area. The war played a massive part in the downfall and decline of Fleetwood. Damage and casualties, ships taken away, no room for business, all these factors contributed to the decline of Fleetwood. Fleetwood stayed strong after the war and managed to pick up some of the pieces and start again. However, this wasn't enough. A new dock was built in Preston, and in Manchester a new ship canal was built. This meant that many cargo ships started to abandon Fleetwood, and by the 19th Century they were gone. ...read more.

This circle didn't stop. Some of the other problems were: * 1952: Fleetwood Pier burnt down. * 1961: Sailings to Isle of Man stopped * 1966: Closure of railways. * 1970: Petrol prices rose. * Streets demolished * ICI Plant closed * Quay demolished These are only a few of the problems. Fleetwood also had another industry that was hit hard, the mining industry. This gradually slowed to a stop when there were problems of water leaks, roof collapses and many accidents. Because of this on the 31st December 1930 the mines were closed permanently. All of these factors contributed to the downfall of Fleetwood. In my results there are some other reasons why Fleetwood declined. ...read more.