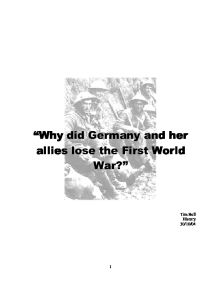 &quot;Why did Germany and her allies lose the First World War?&quot;

"Why did Germany and her allies lose the First World War?" Tim Bell History 30/10/04 What was expected to be a war over by Christmas 1914, actually lasted for 4 long years. World War I, fought between the central powers (Germany, Austria, and Italy) and the tripple entente (Britain, France, and Russia), has many topics of contreversy. One of these topics is as why Germany and her allies lost the war in 1918? One cannot conclude that Germany lost due to one factor. It was a combination of a few things that led to the downfall in force from Germany and her allies. Although at many points during the war, Germany had the upper hand, a series of failures and faults on behalf of Germany and her allies, concluded with an armistice bearing harsh conditions for Germany and her allies. Germany did seem to be very strategically ready for the war, yet all-in-all, too many risks were taken which could not have afforeded to fail. And as one plan failed, the next plan had to be taken into action allowing for a very strategic yet risky approach to the war. Planning started years before the war from the German side. A man by the name of Alfred von Schlieffen, modified a plan known as "The Schlieffen Plan" to strategically advance through Belgium into France allowing for a surprise attack. ...read more.

At this point, neither France nor Germany was gaining land yet losing a lot of men. Britain and Russia aided France as they made offensive moves on Germany, releasing pressure off Verdun as German troops were reassigned to different locations at the Battle of the Somme and the Eastern Front. Germany was in a bad situation, and France was able to counter-attack. Germany was forced to retreat. At this point the Kaiser of Germany saw the errors and failures of the German army and reappointed a new General - Hindenburg. Hindenburg felt no reason to stay in Verdun and retreated the remaining troops. Again, Germany had not planned carefully in advance and had lost 440,000 men without any tatical advances. This could be seen as another factor which ultimately led to the defeat of Germany and her allies. During 1917 there was not much advancements from eitherside and there was a stalemate throughout the Western Front. On the Eastern Front, the Russians were putting up a good fight up until November 1917 when communists known as "the bolsheviks" started a revolution and overthrew the government with a coup. This led to the Treaty of Brest-Litovsk. It was a peace treaty between Russia and the Central Powers that stated a truce between the two without any conditions. It turned out that Russia's terms were harsh and turned out that Russia lost much of its land, population, and resources. ...read more.

It was on November 11, 1918 that an "armistice" was signed between Germany and her allies and the Entente. The conditions required Germany to pull her troops back out of French territory and a newly neutral area to be created on the right bank. Germany's army was to be reduced in size. Germany was in no state to oppose these conditions and was forced to accept. Ultimately, this was the defeat of germany and her allies. When one steps back and looks at all these factors, one can conclude that Germany and her allies made to many failure and false planning. Starting with the Schlieffen plan, Germany made wrong decisions which led to a new problem. When one puts all these factors together it was inevitable that Germany would eventually have to sign the armistice and be declared defeated. Possibly the main factor was the underestimation of supply. As historian Jay Winter put it, ""The paradox of World War I was that Germany fought a war to gain an empire, but needed an empire in order to win the war." The situation with food shortage led to the greatest problems both on the battlefield and within Germany itself. Hunger allowed for a downfall in Morale and led to a fall in German power. In the end, one cannot conclude that Germany and her allies lost because of one thing. It is obvious that only a combinations of the factors led to the final defeat. 1 ...read more.