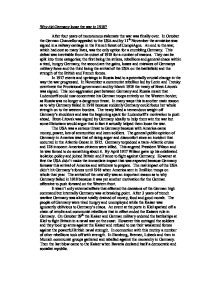 Why did Germany loose the war in 1918? After four years of monotonous stalemate the war was finally over. In October the German Chancellor appealed to the USA and by 11th November the armistice was signed in a railway carriage in the French forest of CompiAgne. An end to the war, which had cost so many lives, was the only option for a crumbling Germany. This defeat was inevitable from the outset of 1918 for a number of reasons. They can be split into three categories; the first being the strikes, rebellions and general chaos within a tired, hungry Germany, the second are the gains, losses and mistakes of Germanys military force and the third being the arrival of the USA on the battlefield and the strength of the British and French forces. In 1917 events and uprisings in Russia lead to a potentially crucial change in the way the war progressed. In November a communist rebellion led by Lenin and Trotsky overthrew the Provisional government and by March 1918 the treaty of Brest-Litovsk was signed. This non-aggression pact between Germany and Russia meant that Ludendorff could now concentrate his German troops entirely on the Western border, as Russia was no longer a dangerous threat. In many ways this is another main reason as to why Germany failed in 1918 because suddenly Germany could focus her whole strength on to the western borders. ...read more.

These are Ludendorff's three main motivations for pushing forward with great force. General Ludendorff knew that if he were to lead Germany to a victory then it would be now or never. The Brest-Litovsk treaty is significant here because it freed thousands of troops that would strengthen the western offensive. The arrival of the USA is an extremely important point because Ludendorff knew that his army was useless against the power and strength that backed the USA so he needed to attack before they arrived on the battlefield. The internal collapse is probably equally important if not more important because Ludendorff knew that he either had to end the war or win it before a revolution swallowed Germany. Thus the Ludendorff offensive emerged. The Ludendorff offensive was a series of operations that aimed to divide and conquer the allies through the use of a new, motivated and highly trained army nicknamed the 'shock troops'. These shock troops were the key that would make it or break it for Germany and Ludendorff new that this was his last chance to break the stalemate before America actually arrived on the Western front and a revolution broke out in Germany. The Ludendorff offensive, or spring push, consisted of 5 main attacks through which Germany needed to break the stalemate to gain significant land. On March 21st 1918 Germany launched the first of five main attacks codenamed 'operation Michael'. ...read more.

The armistice itself might not have been signed in 1918 if the internal affairs of Germany weren't so dramatic. Because of chaos the Kaiser was forced to abdicate and therefore Ebert ended the war. I think that out of all the reasons I have explored in this essay I may conclude that the chaos and social exhaustion in Germany in 1918 is equally important as the failure of the German offensive and the successes of the Allied counter attack. However I will also add that the anarchy in Germany may be slightly more important because if it wasn't for the hungry, frustrated and commonly violent people of Germany not only would the fear of a revolution be absent and therefore Ludendorff wouldn't be so pressurised but also the Kaiser may never have felt that abdication was his last resort and if the Kaiser hadn't abdicated then maybe the war would have dragged but because he did the armistice was signed by and eager Ebert who had the total support of his country. Some Historians would argue that the failure of the German offensive was more important because if the offensive had been a success then not only would there be a change of heart in the people of Germany but there would be no need for an armistice if Germany had the upper hand. In conclusion I think that all of these reasons are necessary to the closure of war and in I am no means discounting other reasons by saying that the internal collapse of Germany is more important. ...read more.