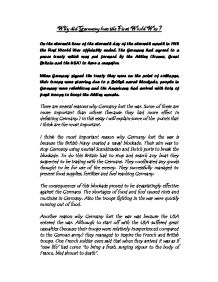 Why did Germany lose the First World War

Why did Germany lose the First World War? On the eleventh hour of the eleventh day of the eleventh month in 1918 the First World War officially ended. The Germans had agreed to a peace treaty which was put forward by the Allies (France, Great Britain and the USA) to have a ceasefire. When Germany signed the treaty they were on the point of collapse, their troops were starving due to a British naval blockade, people in Germany were rebellious and the Americans had arrived with lots of fresh troops to boost the Allies morale. There are several reasons why Germany lost the war. Some of these are more important than others (because they had more effect in defeating Germany.) In this essay I will explain some of the points that I think are the most important. ...read more.

The consequences of this blockade proved to be devastatingly effective against the Germans. The shortages of food and fuel caused riots and mutinies in Germany. Also the troops fighting in the war were quickly running out of food. Another reason why Germany lost the war was because the USA entered the war. Although to start off with the USA suffered great casualties (because their troops were relatively inexperienced compared to the German army) they managed to inspire the French and British troops. One French soldier even said that when they arrived it was as if "new life" had come "to bring a fresh, surging vigour to the body of France, bled almost to death". In Summer 1918 the American troops started to make a big difference. ...read more.

In November 1917, at Cambrai in France 378 Allied tanks advanced 5.5 miles in one day. This is the same distance their troops advanced in a terrible three month massacre that killed over 400,000 people at Passchendaele in Belgium. At this battle the tank secured its reputation as an invaluable offensive weapon in the First World War. Finally, Germany had to fight the war on two fronts- on the east against Russia and on the west against Britain and France. This caused great strain on the German economy and by the end of the war they found it very hard to distribute food to all their troops. As Germany was fighting a war on two fronts this greatly helped the Allies as Germany could not have all of its troops in one place. It made the number of troops they had to fight on each front less. ...read more.