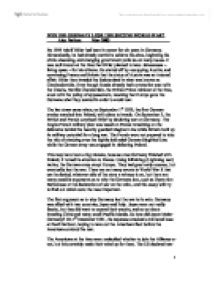 Why did Germany lose the second world war?

WHY DID GERMANY LOSE THE SECOND WORLD WAR? Alex Nathan May 2003 By 1939 Adolf Hitler had been in power for six years in Germany. Domestically, he had already started to achieve his aims, beginning his ethnic cleansing, and changing government policies on many issues. It was well known at the time that Hitler planned to have lebensraum - living space - for his citizens. He started off by occupying Austria, and convincing France and Britain that the status of Austria was an internal affair. Hitler then invaded the Sudetenland in what was known as Czechoslovakia. Even though Russia already had a protection pact with the Czechs, Neville Chamberlain, the British Prime-minister at the time, stuck with the policy of appeasement, meaning that Europe gave the Germans what they wanted in order to avoid war. The last straw came when, on September 1st 1939, the first German armies marched into Poland, with plans to invade. On September 3, the British and French surprised Hitler by declaring war on Germany. The Anglo-French military plan was based on France remaining on the defensive behind the heavily guarded Maginot Line while Britain built up its military potential for a long war. ...read more.

This brings us to what was most likely Hitler's worst mistake. He decided to stop the bombing of Britain and turn his attention instead to invading Russia. This took the heat off Britain while it rapidly recovered and recouped its military strength. The invasion of Russia was called Operation Barbarossa. Hitler thought that he could have Russia invaded by the end of the summer, but he did not take into account some factors that contributed greatly to his loss. One was that he would have to split his troops up, making them weaker. Also, since Russia is on the East of Germany, and Britain and France on the West, he would have to fight a war on two fronts. It was a great risk as he had no way of knowing whether the army could take on such a task. Russia was far too big for Blitzkrieg, and the Russian roads were awful making it very hard for the Germans to move around quickly. Russia was also given a huge amount of assistance by the allies, and especially Britain. "Her supremacy at sea meant that Russia could be kept supplied by the North Atlantic route to Murmansk, while the bombing of German factories helped constrain the German war base."- Aspects of British Political History 1914 - 1995 - Stephen J. ...read more.

The invasion of Russia on the other hand was a shorter term effect, as it defeated him there and then, leaving him open to attack from the West. It is also easy to see links between many of the reasons. Had Hitler won the battle of the Atlantic, the Allies in Europe would probably not have had enough equipment or supplies to survive. Had he continued with his bombing of the RAF instead of bombing cities, he would have won the Battle of Britain and so been able to invade the island. These links are endless. It could easily be argued that D-day was among the most important factors, but this essay has chosen not to include for a simple reason. Japan bombed Pearl Harbour, and so the USA declared war on them. But, up till then, the Germans had done nothing to hurt the USA directly. If Hitler had thought this through and not declared war on the USA, they might never have entered the war. Finally, this essay believes that it was not inevitable that Germany would lose the war. Hitler's invasion of Russia and the subsequent defeat was the single most important reason for Germany's defeat. Even if the Allies had not had America on their side, the mixture of Russian resolve, allied strength and Hitler's mistakes would have ultimately defeated the Germans. 1 ...read more.