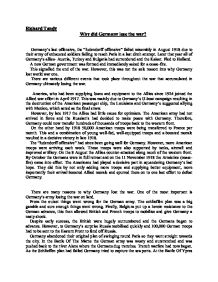 Why did Germany lose the war?

Richard Tandy Why did Germany lose the war? Germany's last offensive, the "ludendorff offensive" failed miserably in August 1918 due to their army of exhausted soldiers failing to reach Paris in a last ditch attempt. Later that year all of Germany's allies- Austria, Turkey and Bulgaria had surrendered and the Kaiser. Fled to Holland. A new German government was formed and immediately asked for a cease-fire. This signalled the end of the war. However, this was not the sole reason into why Germany lost world war one. There are various different events that took place throughout the war that accumulated in Germany ultimately losing the war. America, who had been supplying loans and equipment to the Allies since 1924 joined the Allied war effort in April 1917. This was mainly due to Germany's U-boat campaign resulting in the destruction of the American passenger ship, the Louisiana and Germany's suggested allying with Mexico, which acted as the final straw. However, by late 1917 the Allies had little cause for optimism. The American army had not arrived in force and the Russian's had decided to make peace with Germany. ...read more.

Germany proved this throughout most of the war. However, Germany struggled towards the end of the war due to Russia stretching the German army and America getting involved. At this point the German army was exhausted and did not have the reserves it needed in which to fight the Allies, who had huge reserves in the American army. Before the war both Britain and Germany raced to build as many Dreadnought battleships as possible. However, there was only one major sea battle during the First World War, the battle of Jutland. The key objective was to control the seas to stop supplies getting to your enemy. This is exactly what Britain did in the British Naval Blockade which stopped supplies reaching Germany. The blockade kept the German surface fleet in port for most of the war therefore, this contributed to food shortages in Germany, particularly towards the end of the war. This lowered German morale. The blockade also enforced inactivity among the German surface fleet crews. It lowered their morale and contributed to their revolutionary activity and mutiny in late 1918. The British blockade was a crucial factor in the Allied victory over Germany. ...read more.

However, they did build anti-tank ditches to defend themselves from tank attacks. Over all the tank did not contribute to breaking the stalemate in the war until November 1917 when tanks actually achieved great success. Unfortunately the tanks blasted through enemy lines so quickly that the infantry could not keep up. It was made clear that the war would only be won through sheer hard work and determination. In my opinion I think there two or more combined reasons that resulted in Germany losing the war. Firstly, I think the Naval Blockade of Germany was one key reason. This is because with Germany starved of supplies, the German army was consequently weakened and the German people lost most of their will to support the war. Therefore this would be one long-term reason which resulted in Germany losing the war. My second reason is the German army losing the war on land. With this happening Germany would, and did not have any chance of winning the war what so ever. In addition, I don't think that America joining the war won it for the allies. This is because the war was practically won by the allies because the German army was so exhausted. Therefore, really America just speeded up what was inevitably going to happen. ...read more.