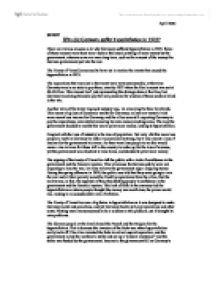 Why did Germany suffer hyperinflation in 1923?

30/10/07 Why did Germany suffer hyperinflation in 1923? There are various reasons as to why Germany suffered hyperinflation in 1923. Some of these reasons were short term- such as the actual printing of more money by the government, whereas some are more long term, such as the amount of the money the German government put into the war. The Treaty of Versailles seemed to have set in motion the events that caused the hyperinflation in 1923. The reparations that were set in the treaty were very unreasonable, at that time Germany was in no state to pay them, even by 1921 when the final amount was set at �6.6 billion. This amount isn't just representing the damage done at the time, but Germany was being forced to pay for war pensions for widows of those soldiers killed in the war. Another term of the treaty imposed industry loss, via removing the Saar Coalfields. ...read more.

During the spring offensive in 1918, the public was told that they were going to win the war and all their poverty would be fixed by reparations from the allies. But the reality was; in fact, the opposite of this; thus shaking people's confidence in the government and the financial system. This lack of faith in the currency led the hyperinflation as where people thought the money was worth less, the prices would rise, leading to an unsustainable rate of inflation. The Treaty of Versailles was a big factor in hyperinflation as it was designed to make Germany weak and powerless, and yet Germany had to still pay reparations and other costs. Printing more money seemed to be a solution to this problem, yet it brought its own problems. The German people at the time blamed the French and the Belgian for the hyperinflation. This is because the invasion of the Ruhr was when hyperinflation really took off. ...read more.

However they lost the war, and were left with a huge national debt and reparations; which together was a huge amount for the government to pay. So to try and combat this, the government printed yet more money. Economically the hyperinflation was caused by a huge loss of confidence in currency, due to a combination of all these reasons. It was also unable to try and stop this chain of events. Overall I think that although all of the reasons are important, the Treaty of Versailles was the main cause. For without it the government wouldn't have had to deal with the invasion, and public opinion would still be good. However; I think the government could have tried to raise taxes instead of printing more money, but this would have led to other problems, such as an unpopular government, which would increase support for extremists. So overall I feel that hyperinflation was inevitable and was caused by all of the above reasons. ?? ?? ?? ?? April Betts ...read more.