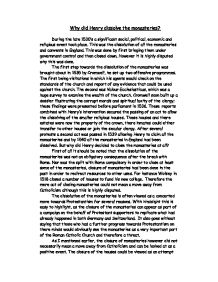 Why did Henry dissolve the monasteries?

Why did Henry dissolve the monasteries? During the late 1530's a significant social, political, economic and religious event took place. This was the dissolution of all the monasteries and convents in England. This was done by first bringing them under government control and then closed down. However it is highly disputed why this was done. The first step towards the dissolution of the monasteries was brought about in 1535 by Cromwell, he set up two offensive programmes. The first being visitations in which his agents would check on the standards of the church and report of any evidence that could be used against the church. The second was Valour Ecclesiasticus, which was a huge survey to examine the wealth of the church. Cromwell soon built up a dossier illustrating the corrupt morals and spiritual laxity of the clergy; these findings were presented before parliament in 1536. These reports combined with Henry's intervention secured the passing of an act to allow the dissolving of the smaller religious houses. These houses and there estates were now the property of the crown, there inmates could either transfer to other houses or join the secular clergy. ...read more.

It also goes without saying that those who had a further progress towards Protestantism on there minds would obviously see the monasteries as a very important part of the Roman Catholic Church and therefore a threat. As I mentioned earlier, the closure of monasteries however did not necessarily mean a move away from Catholicism and can be looked at as a positive event. The closure of the houses could be viewed as an attempt to stop the abuses that could arise in monasticism and so emphasising the good work continued in the remaining houses. This was the official line that was expressed in the dissolution act of 1536 however this argument carries little weight as by 1540 all the monasteries had been dissolved; therefore it could not be an attempt to reform and is more likely a resolute move towards Protestantism. It is also widely held that the conditions in the church at this time were over exaggerated and abuses and corruption were not common, it is often thought that visitations were rigged and the evidence compiled and presented to parliament was misleading. ...read more.

From 1536 to Henry's death over 1.3 million pounds was made from the dissolution. This figure was likely to be a large factor in Henry's decision to dissolve. It is indubitable that one of the main reasons the dissolution began was due to financial issues, however the question has to be asked whether Henry planned complete termination from the start? The words in the dissolution act of 1536 would seem to deny this. I would assert that Henry began the closure of the lesser monasteries to promote reform and to raise revenue however his greedy personality and his Protestant minister persuaded him to continue with complete dissolution. Professor Scarisbrick would disagree by stating that 'any plan should be kept secret and the first move should be given the impression of just reform. Reassuring the clergy and winning over their trust with a barrage of promises. Henry's failure to live up to these promises suggested that he had practised what he now preached.' However it is still unclear whether Henry was lead to dissolution by Cromwell or whether it was Henry that held the Mens rea. ...read more.