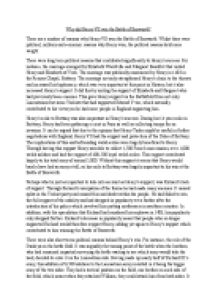 Why did Henry VII win the Battle of Bosworth?

﻿Why did Henry VII win the Battle of Bosworth? There are a number of reasons why Henry VII won the Battle of Bosworth. Whilst there were political, military and economic reasons why Henry won, the political reasons held more weight. There were long term political reasons that contributed significantly to Henry?s success. For instance, the marriage arranged by Elizabeth Woodville and Margaret Beaufort that united Henry and Elizabeth of York. The marriage was publically announced by Henry in 1483 in the Rennes Chapel, Brittany. The marriage not only strengthened Henry?s claim to the thrown and increased his legitimacy, which was very important at this point in History, but it also increased Henry?s support. It did this by uniting the support of Elizabeth and Margaret who had previously been enemies. This gave Henry support on the Battlefield from not only Lancastrians but some Yorkists that had supported Edward V too, which naturally contributed to his victory as he had more people in England supporting him. ...read more.

It was arguably the turning point of the battle when the brothers, who had remained impartial surveying the battle waiting to see which army would take the lead, decided to enter it on the Lancastrian side. Having made up nearly half of Richard III?s army, this addition of 6,500 soldiers to the Lancastrian army resulted in it being the bigger army of the two sides. They had a tactical position on the field, one brother on each side of the field, which meant when they attacked William, they could attack him from both sides. It was a combination of having more soldiers and the Stanley brother?s strategic location on the battle field that then led to Richard?s death and the end of the battle. There were some short term military reasons as to why Henry won the Battle of Bosworth. Henry?s uncle Jasper Tudor was able to assist him with his military expertise however it was largely down to military luck and chance that Henry was victorious. ...read more.

Henry was able to gain the necessary economic support from Charles VIII of France due to Charles hoping this would distract Richard III from sending help to Brittany. It was this economic support that gave Henry VII the best chance in battle which therefore contributed to his victory. It is clear to see that without doubt that the political reasons for Henry winning the Battle of Bosworth not only outnumber the military and economic reasons but they are of greater importance too. The military reasons hold little significance due to the nature of the battle. This is effectively put by Charles Oman, writer of The Art of War in the Middle Ages that the Battle of Bosworth ?can hardly be taken for serious military study- since it was not settled by strategy or tactics, but by mere treachery?. In addition to this, the economic reason was only one piece in the jigsaw puzzle to why Henry won, whereas the political reasons, both long term and short, made larger contributions to the victory as a whole not only in the build up to the Battle, but during the Battle itself. ...read more.