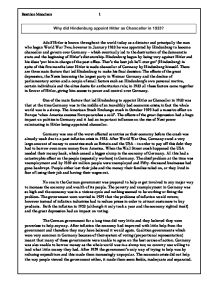 Adolf Hitler is known throughout the world today as a dictator and principally the man who began World War Two; however in January 1933 he was appointed by Hindenburg to become chancellor and govern over Germany - which eventually led to the destruction of the democratic state and the beginning of Hitler's dictatorship. Hindenburg began by being very against Hitler and his ideas 'put him in charge of the post office. That's the best job he'll ever get' (Hindenburg) in spite of this five months later Hitler is made chancellor of Germany by Hindenburg himself. There are three main factors that led Hindenburg to make his final decision: The effects of the great depression, the Nazis becoming the largest party in Weimar Germany and the decline of parliamentary action and a couple of small factors such as: Hindenburg's own personal motive, certain individuals and the elites desire for authoritarian rule; in 1933 all these factors came together in favour of Hitler, giving him access to power and control over Germany. One of the main factors that led Hindenburg to appoint Hitler as Chancellor in 1933 was that at the time Germany was in the middle of an incredibly bad economic crisis; in fact the whole world was in a slump. The American Stock Exchange crash in October 1929 had a massive effect on Europe 'when America sneezes Europe catches a cold'. The effects of the great depression had a huge impact on politics in Germany and it had an important influence on the rise of Nazi power culminating in Hitler being appointed chancellor. Germany was one of the worst effected countries as their economy before the crash was already weak due to a past inflation crisis in 1923. After World War One, Germany owed a very large amount of money to countries such as Britain and the USA - in order to pay off this debt they had to borrow even more money from America. ...read more.

'Volksgemeinshaft' - national community, save the people from the Jewish moneylenders (the Nazis and many others at this time disliked the Jews and blamed them for taking jobs from true German citizens), end the Weimar democratic system and stop communism. The Nazis main appeal was also for the nationalists, their belief in making Germany great for the German people; their anti-Semitic views were also extremely strong. The rapid increase in support for Nazis also meant that they gained some financial funding from industries, which meant an increase in what they could spend on propaganda and getting the attention of the public. The Nazis campaign might have spread quickly through the word of mouth too, people telling others what they have heard about the party. The fact that its support augmented so quickly would cause others to be intrigued by the party's mass success. The Sturm-Abteilung (storm detachment) or SA was formed in 1920 to protect the Nazi speakers from the opposition, at first it was a small organisation but like the Nazi party it too grew rapidly and by 1933 there were 500,000 members. The SA were organised and each member was given a brown shirt that was emblazoned with the swastika (the Nazi emblem) from 1921 - 23 and 1930 - 34 the SA was run by Ernst Rohm, who was a friend of Hitler's. The SA attracted a lot of men for reasons such as; the enjoyment of violence, their hatred for communism, comradeship, food and occasionally accommodation. He saw the SA as an army that would one day be the head of a new Nazi state. The SA played a massive role in Hitler and the Nazi party's success. Although there methods were often violent, the SA were extremely well organised and efficient, people believed that this party and its army would be able to take control of Germany once more. ...read more.

By using the weak Weimar state they could have made a bigger impacts but they never gained any more than twenty percent of the vote. They looked at trying to attract the working class and they only took up fifty percent of the over all vote. If the communists had tried to reach a wider audience there may have been more of a competition between them and the Nazis. The pressures built up by these factors all led Hindenburg to make his final big decision. The fact that Hindenburg had refused Hitler only five months earlier showed that he did not agree with the Nazi's or Hitler's ideas but the situation in Germany had become so dyer, he was pushed to the last resort. The country needed a change and both the government and the people knew this, Hindenburg needed to take action before the mess worsened. The only other alternative for Germany was to become a communist state - people, including Hindenburg would not have wanted their government to collapse that low, in his fear he may have chosen to appoint Hitler to try and calm the public and show he was trying to make changes. I believe that the most important factor for Hitler's rise to power was the great depression as this led people to desperation and often the more extremist parties. Nonetheless no one reason can explain why Hitler gained power in Germany 1933. Many of the reasons are inter-linked. The Depression led to high unemployment because factories had closed down, and farmers and many businessmen could not sell their goods. The Depression led to millions supporting parties that worked to end the Weimar republic. Many businessmen then looked to Hitler to defend them from the communists. All of this increased support of the Nazi party, no one person or situation on its own led to Hitler being put in power and I believe Hindenburg had many reasons for appointing Hitler as Chancellor. ?? ?? ?? ?? Beatrice Meecham 1 ...read more.