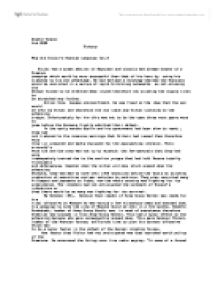 Why did Hitler&amp;#146;s Russian campaign fail?

Sophie Taylor 2nd GCSE History Why did Hitler's Russian campaign fail? Hitler was a great admirer of Napoleon and clearly had always dreamt of a Russian campaign which would be more successful than that of his hero by using his mistakes to his own advantage. He had devised a strategy whereby the Russians would be encircled in a series of rapid blitzkrieg movements so not allowing the German forces to be diverted deep inland therefore not allowing the supply lines to be stretched any further. Hitler thus became overconfident. He was fixed on the idea that the war would be over by winter and therefore did not issue any winter clothing to the advancing troops. Unfortunately for him this was not to be the case three more years were to pass before the Germans finally admitted their defeat. In the early months Stalin and his government had been slow to react , they had not listened to the numerous warnings that Britain had issued them therefore were very ill prepared and badly equipped for the approaching invasion. ...read more.

This had a major effect on the advancing Germans who were consequently slowed down. This gave General Zhukov, leader of the Russian forces, sufficient time to plan his counter offensive which was to be a major factor in the defeat of the German invading forces. One factor that Hitler had not anticipated was that scorched earth policy of the Russians. He announced the Policy over live radio saying: "In case of a forced retreat... all rolling stock must be evacuated, the enemy must not be left a single engine, a single railway car, not a single pound of grain or gallon of fuel. The collective farmers must drive off all their cattle and turn over their grain to the safe keeping of the state authorities for transportation to the rear. All valuable property, including non-ferrous metals, grain and fuel that cannot be withdrawn must be destroyed without fail. In areas occupied by the enemy, guerilla units.... ...read more.

All it did was divide the forces therefore further weakening the German advance into Russia. They wasted much valuable ammunition, fuel and men on a pointless battle. Hitler did not want at any cost that Von Paulus, in charge of the VI Panzer Army, surrender, he prefered letting his valuable supply of men die in fierce combat than to retreat. It was obvious to any outsider that they were on the loosing side from the beginning, but still he did not back down. He knew that if this battle was lost it would be a serious boost of moral to the Russian population so was so suicidal in his tactics. This major loss of men ( about a 150 000 men) could have made an important difference in the outcome of the invasion. The hazardous conditions of the bitterly cold Russian winter did not help the Germans in their planned submission of the Russian people. When one considers that three had to be endured before defeat was finally admitted. As Napoleon had seen more than a century before that the temperature was the most formidable opponent : General winter. ...read more.