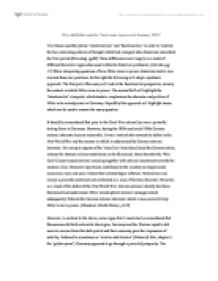 Why did Hitler and the Nazis come to power in January 1933?

Why did Hitler and the Nazis come to power in January 1933? Tim Mason used the phrase 'intentionalism' and 'functionalism' in order to illustrate the two contrasting schools of thought which had emerged when historians researched the Nazi period (Browning, pg.86) These differences were largely as a result of different theoretical approaches used within the historical profession. (Kershaw,pg 11) When interpreting questions of how Hitler came to power; historians tend to lean towards these two positions. In this light the following will adopt a synthesis approach. The first part of the essay will look at the functionalist perspective, namely the context in which Hitler came to power. The second half will highlight the 'intentionalist' viewpoint, which tends to emphasises the character and politics of Hitler as he seized power in Germany. Hopefully this approach will highlight issues which can be used to answer the essay question. It should be remembered that prior to the Great War nationalism was a powerful driving force in Germany. However, during the 1920s and early 1930s German national character became vulnerable. It was a nation bitter towards its defeat in the First World War and the manner in which it undermined the German national character. For example aspects of the Versailles Treaty humiliated the German nation, witness for instance military restrictions in the Rhineland. ...read more.

Fifty-thousand businesses had gone bust. Six million people were left unemployed in Germany alone. It could be argued that the action taken by the Weimar Republic actually did more harm than good. For example one measure taken, was to cut expenditure. War veteran pension schemes were reduced much to the embitterment of many already nationalistic soldiers from the Great War. This economical unrest within Germany left the society looking for stability, strength and a new leader with a nationalistic approach. Hitler appealed to large parts of the German population with arguments of socialist rhetoric and economic stability. (Chambers World History p575) Turning to the intentionalist perspective; a viewpoint which tends to emphasize Hitler's character and his world view. Perhaps the key evidence to support the intentionalist argument is Hitler's ideas and aspirations outlined in Mein Kampf. For example: Hitler clearly explains his plans of invasion to further the 'supreme race' (Aryan) And furthermore illustrates his hatred of the Jewish people. 'The mightiest counterpart to the Aryan is represented by the Jew'(www.historyplace.com ) Even so despite Hitler's extreme rhetoric found in Mein Kampf it's all to easy to forget that in some circles Hitler was a popular politician prior to 1933. For example despite its eventual failure, the Munich beer hall putsch illustrated the willingness of Nazi party members to follow Hitler. ...read more.