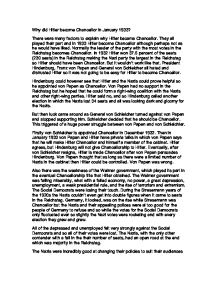 Why did Hitler become Chancellor in January 1933?

This greatly appealed to the farmers and middle classes. Hitler made his party more organised after he was released from prison in December 1925. He realised that violence was getting him nowhere in the Reichstag so he steered his party away from that form of behaviour that was giving them a bad name. The Nazis were brilliant when it came to propaganda and public rallies and meetings. No other party focussed more on propaganda than the Nazis. The Nazis felt that flyers, leaflets, radio, rallies and meetings were the key to success. If a subject proved popular then they would repeat it. In this way the Nazis developed a very sensitive system of propaganda. Although this system was working and membership was increasing nothing could have set the Nazis on a better path to power than events in 1929. In October 1929 the Wall Street Crash was the beginning of a worldwide slide into the Great Depression. The effects were catastrophic, especially for Germany. All of the loans from America that Germany's economy relied on were withdrawn. Thus the Dawes' Plan failed and the economy collapsed putting Germany in a position reminiscent of 1923 and the hyperinflation. This depression only helped the Nazis. Life during the depression was awful and it affected everybody: young, old, rich and poor. The Nazis seized their opportunity and launched a whole fleet of policies regarding unemployment, taxes, pensions, and all of the problems that the Weimar Republic were having. ...read more.

He was built to be some kind of superman and Hitler thought his appearance of being strong was imperative. He never wore the spectacles that he needed to read in public, so his speeches were typed in large letter so that he could read them easily. Also the weakness of the opposition was important for the Nazis' success. Other parties were very weak and consistently underestimated the Nazis. The Social Democrats were more worried about a putsch that the Nazis might attempt rather than their threat as a political party. They thought that it was absurd that the Nazis thought that they could get power through the Reichstag. I think that although all of the events and factors mentioned above played important roles in Hitler's road to Chancellorship there is one that played the largest part of all. I think that that was the Political manoeuvring between von Scheilcher and von Papen. Without this Hitler would not have become Chancellor, but without Hindenburg and his hatred of Hitler, Hitler would have become Chancellor. But then again without The Wall Street Crash the Nazis wouldn't have been able to exploit the Weimar Republic and their failures and the Great Depression. The list goes on with "what if..."s. all the factor played their part. It was just as if there were a line of Dominoes, starting with the reorganisation of the Nazis and ending with political manoeuvring. It there was a gap in the factors, like a gap in the line of dominoes then the final factor would not have been reached. ...read more.