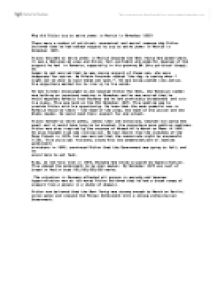 Why did Hitler try to seize power in Munich in November 1923?

and ruin his plans. This was held on the 8th November 1923. This meeting was to provide Hitler with his opportunity. He knew that the most powerful men in Bavaria would be there - the head of the army, the head of the police and the State leader. He would need their support for any putsch. Hitler wanted to seize power, rather than use elections, because his party was small and it would take long to be elected. ...read more.

Also, at the this time in 1923, Germany was being crippled by hyperinflation. This showed the government to be even weaker. By November 1923 one loaf of bread in Berlin cost 201,000,000,000 marks. The situation in Germany affected all groups in society and because hyperinflation was at its worst Hitler believed that he had a broad range of support from a people in a state of despair. Hitler now believed that the Nazi Party was strong enough to March on Berlin, seize power and replace the Weimar Government with a strong authoritarian Government. ...read more.