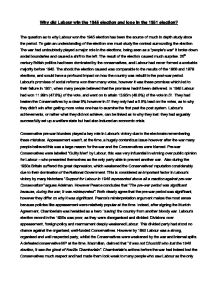 Why did Labour win the 1945 election and lose in the 1951 election? The question as to why Labour won the 1945 election has been the source of much in depth study since the period. To gain an understanding of the election one must study the context surrounding the election. The war had undoubtedly played a major role in the elections, being seen as a "people's war" it broke down social boundaries and caused a shift to the left. The result of the election caused much surprise. 20th century British politics had been dominated by the conservatives, and Labour had never formed a workable majority before 1945. The shock the election caused was comparable to the results of the 1906 and 1979 elections, and would have a profound impact on how the country was rebuilt in the post-war period. Labour's promises of social reforms won them many votes, however it was these promises which led to their failure in 1951, when many people believed that the promises hadn't been delivered. In 1945 Labour had won 11.99m (47.8%) of the vote, and went on to attain 13.95m (48.8%) of the vote in 51. They had beaten the Conservatives by a clear 8% however in 51 they only had a 0.8% lead on the votes, as to why they didn't win after getting more votes one has to examine the first past the post system. Labour's achievements, or rather what they did not achieve, can be linked as to why they lost: they had arguably successfully set up a welfare state but had also induced an economic crisis. ...read more.

While it cannot be disputed that Labour kept their campaign simple, it would be ill-advised to declare that it helped enormously. Most obviously, because the campaign's importance is overshadowed by the larger, more influential issues. The Conservatives' campaign focused on Churchill and international relationships rather than any major new reforms that the electorate so desperately wanted. The party's manifesto was named "Mr Churchill's Declaration of Policy to the Electorate", in the hope of taking advantage of Churchill's huge popularity. Churchill however made a gross error in saying that Labour would need a Gestapo like organisation to enforce socialism upon Britain. Atlee used this as an opportunity to emphasise that although Churchill was a great wartime leader he was not such a good domestic politician. Labour's manifesto was based around the Beveridge report and the Nationalisation of industries, ideas that had been tested during the war and were found to work. Named " Let Us Face the Future", it emphasised that Labour were the only party that could be trusted to deliver a strong Britain and Beveridge's plans. Labour's campaign, although not crucial to their success, was better organised, funded and planned than the Conservatives' and, as such, made Labour look strong - in contrast with the Conservatives. After gaining such a large majority in 1945, most Labour politicians felt relatively assured that they had at least 10 years in office secured. This led to complacency with Labour relying too heavily on support from voters who felt betrayed. Labour entered the 1950 election confidently, while the conservatives were uncertain of themselves, effectively a role reversal from 1945. ...read more.

Granted, in 45 Labour obviously won a landslide of the seats, but a majority of 8% is far from a landslide of the votes. WW2 obviously played a large role in the results of both the 1945 and 1951 elections, in 1945 its effects were clear on the homefront as it had acted as a catalyst to socialist ideas and in 1951 it was the economic turmoil that the war had triggered which led to many people to vote for the "reliable" conservatives. The state of the economy had contributed to both elections also - 1945 voters remembered the conservative led crippled economy of the 1930s; and in 1951 voters judged labour on the struggling economy of the time. Each party's history had a role in both 1951 and 45, the conservative led National Government of the 1930s were blamed for the depression, appeasement and delayed rearmament in 1945. Whilst in 1951 the Labour government was punished for its unrealistic promises made in 1945. Also in both cases the campaigns were of negligible importance. Although interesting they had little to do with shifting the electorate's opinions, indeed in 1945 both parties' campaigns were largely improvised. Certainly a major factor in the 1951 election was the redrawing of constituency boundaries, which dwarfs in significance the factors which should have mattered - indeed electoral systems were crucial to both elections. The first-past-the-post system emphasised each election's result. In 1951 labour actually polled more votes than the conservatives and in 1945 Labour only polled 8% more than the Conservatives yet gained a landslide of seats. Overall, it was the first-past-the-post system that won Labour their 'landslide' victory in 1945 and in 1951 allowed the Conservatives to win despite polling less votes. ...read more.