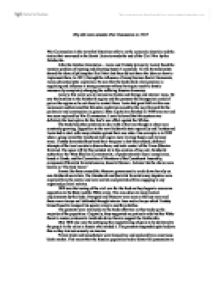 Why did Lenin abandon War Communism in 1921?

Why did Lenin abandon War Communism in 1921? War Communism is the term that historians refer to as the economic situation and the tactics that were used in the Soviet Union towards the end of the Civil War by the Bolsheviks. After the October Revolution - Lenin and Trotsky (primarily Lenin) faced the massive problem of running and directing Russia's economy. All the Revolutionists shared the ideas of philosopher Karl Marx but they did not share the ideas on how to implement them. In 1917, through the influence of many German Social Democrats, Lenin advocated state capitalism. He saw that the banks held a key position in regulating and influence a strong economy without having to resort to drastic measures by completely changing the suffering Russian Economy. Lenin's first move was to nationalize banks and foreign and internal loans. ...read more.

The space left by this incident let to the creation of two anti-Bolshevik authorities: the West Siberian Commissariat, of predominantly liberal complexion, based at Omsk; and the Committee of Members of the Constituent Assembly, composed of Socialist Revolutionaries, based at Samara. Actions like the above were known as 'The Red Terror' Events like these caused the Moscow government to crack down heavily on non-Bolshevik socialists. The Menshevik and Socialist Revolutionary deputies were expelled from the central and local soviets and prevented from engaging in any organized political activity. 1918 saw the turning of the civil war for the Reds as they began to overcome opposition to the State and the White army. This was down to many tactical employments by the Reds. Petrograd and Moscow were seen as the key areas and these were always well defended through interior lines and railways which Trotsky himself used to transport his special army to and from battles. ...read more.

On the other end of the scale were the middle-class as they were now seen as the former people. With these new features of the system, the Bolsheviks looked to be obtaining authority but there were still many cases of attacks against the state. War Communism was not as productive as it seems though. Its foremost aim was to provide for the war and workforce so the normal people did suffer. When the war ended however, people's hopes and expectations changed. Workers and peasants wanted an improvement in their standard of living and an end to wartime policies. With conditions deteriorating by the spring of 1921 - a revolt started against the Bolshevik Government. Shocking cases of the famine in Southern Russia after a severe drought led to the deaths of 5 million people. Lenin could do nothing to win the Russian population over with War Communism in place so he was forced to change. It was these circumstances in 1921 that led to the introduction of NEP and the end of War Communism. ...read more.