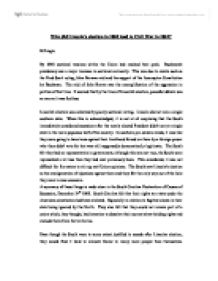 Why did Lincoln's election in 1860 lead to Civil War in 1861? B.Pringle By 1860 sectional tensions within the Union had reached their peak. Buchanan's presidency saw a major increase in sectional animosity. This was due to events such as the Dred Scott ruling, John Browns raid and the support of the Lecompton Constitution by Buchanan. The raid of John Brown was the exemplification of the aggression in politics of that time. It seemed that by the time of Lincoln's election, peaceful debate was as rare as it was fruitless. Lincoln's election was achieved by purely sectional voting. Lincoln did not win a single southern state. When this is acknowledged, it is not at all surprising that the South immediately considered secession after the newly elected President didn't carry a single state in the more populous half of the country. In southern pro-slavers minds, it was like they were going to have laws against their livelihood forced on them by a foreign power who they didn't vote for but was still supposedly democratically legitimate. The South felt they had no representation in government; although this was not true, the South were represented a lot less then they had ever previously been. This considered, it was not difficult for fire-eaters to stir up anti-Union opinions. ...read more.

After his election, Lincoln became very politically quiet and refused to make further comment. He did not make any public speeches or appearances in the South (nor did he in his election campaign) in order to try and reassure the Southerners that he wasn't going to oppress them. Lincoln, after his election, simply told the people to read his speeches and they would answer any questions they might have. The question however of 'how did secession lead to civil war' is at the very heart of this title and the supposed inevitability of Civil War after secession is also disputed. After the original 7 states seceded it became obvious to these Confederate members that just 7 states could not generate an economy as prosperous as that of the Union. This was because of the fact that the Confederacy had only 5% of the Union's industrial capacity. The entirety of this economic problem was that unless the upper 8 states joined the Confederacy, or at least Virginia, there was no way the Confederacy would be nearly as economically powerful as the Union. As a result of this, the chances were that the remaining southern states in the Union would not want to join the Confederacy and the people of the Confederacy would realise their economic decline and begin to put pressure on the Confederacy to rejoin the Union. ...read more.

No one was killed but Lincoln's delegate Anderson surrendered and marched his troops back to Washington. The main problem facing the two sides was that neither could back down once the problem had been escalated. Lincoln could not, as a new President, withdraw from a Federal owned fort; it would be seen as immense weakness in the face of opposition. Similarly, Davis could not allow a Federal owned fort to sit in the middle of a Confederate harbour. Davis could not claim complete sovereign power whilst the Confederacy were still effectively occupied by Union forces. Could the military confrontation at Sumter been avoided? Possibly. But it would have meant one of the two sides stepping down; and after the escalation of sectional confrontation over the previous 40 years, neither side would have been prepared to do this. The consequence of the fighting at Sumter was that Lincoln issued a call to arms, as did Davis. Virginia, vitally for the south, sided with their 'southern brothers' and seceded from the Union, as did Arkansas and North Carolina. Although support for the Confederacy was not overwhelming in these new members of the Confederacy, it was the popular decision. Once all the states had chosen their side, a call to arms had been issued and a Union blockade enforced on the Confederacy, civil war had effectively broken out. ...read more.