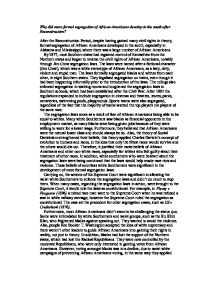 Why did more formal segregation of African Americans develop in the south after Reconstruction?