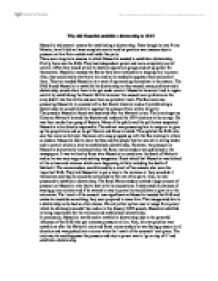 Why did Mussolini establish a dictatorship in 1925?

Why did Mussolini establish a dictatorship in 1925? Mussolini had several reasons for establishing a dictatorship. Even though he was Prime Minster, he still did not have complete control and his position was insecure due to pressure on him from outside and inside the party. There were long-term reasons to which Mussolini needed to establish a dictatorship. Firstly, there was the RAS. They had independent power and were completely out of control. Often they would set out to destroy opposition groups and set up power for themselves. Mussolini needed the Ras as they were invaluable in keeping him in power. Also, they could easily overthrow him and so he needed to appease them and control them. ...read more.

He was then murder by a gang of fascists. Many of the public and the politicians suspected Mussolini to be directly responsible. The cabinet was pressuring him to resign or to give up the perpetrators and so he got Dumini and Rossi arrested. This agitated the RAS who saw this move as betrayal. Rumours of a coup propped up with the Ras looking to others as leaders. Mussolini had to show the Ras and the people that he was still a strong leader and in control which is why he established a dictatorship. However, the pressure on Mussolini dramatically increased when the Rossi memorandum was published in the newspapers. ...read more.

This inaugurated him to a dictatorship as he had no other choice. His only other option was to resign from power which he obviously wouldn't do and so in the January 1925 speech, Mussolini admitted to being responsible for the violence and established a dictatorship. In conclusion, Mussolini was forced to establish a dictatorship due to the powerful influence of the RAS who put immense pressure on him. Also, his own position was unstable as after the Matteotti crisis and Rossi memorandum he was facing pressure in all direction and was pushed into a corner when the 'revolt of the counsels' took place. The only way he could appease the pressure and stay in power was to 'go on top of it' and establish a dictatorship. ...read more.