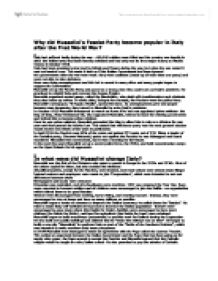 Why did Mussolini's Fascist Party become popular in Italy after the First World War?

Why did Mussolini's Fascist Party become popular in Italy after the First World War? Italy had suffered badly during the war - 460,000 soldiers were killed and the country was heavily in debt. the Italian army had been heavily defeated and had only won its first major victory at Vittorio Veneto in October 1918. Italy had been promised extra land by Britain and France during the war, but when the war ended it was not handed over. This made it look as if the Italian Government had been ignored. the governments after the war were weak. they were coalitions (made up of more than one party) and were not able to take decisions. there was rising unemployment and this led to unrest in many cities and many people began to support the Communists. Mussolini set up the Fascist Party and posed as a strong man who could sort out Italy's problems. He promised to rebuild Italy and recreate the Roman Empire. Mussolini organised armed gangs, called the Blackshirts, who dealt with troublemakers and criminals. they also broke up strikes. In some cities, Bologna for example, the Fascists were the police force. Mussolini's newspaper, "Il Popolo d'Italia", spread his ideas. As unemployment grew and people became more desperate, they turned to Mussolini to solve Italy's problems. In October 1922 Mussolini threatened to march on Rome if he was not appointed prime minister. the king of Italy, Victor Emmanuel III, who supported Mussolini, refused to back the existing government and invited him to become prime minister. Once he was prime minister, Mussolini persuaded the king to allow him to rule as a dictator for one year and then passed the Acerbo Law. This stated that whichever party won the next general election would receive two-thirds of the seats in parliament. In April 1924 the Fascists won 60% of the votes and gained 375 seats out of 535. ...read more.

His determination to also strengthen the Fascist's position led to the creation of the Acerbo Law that would give the leading party two thirds of the seats in parliament that Mussolini made sure was the Fascists. The Mateotti crisis could have seen the breakdown of the Fascist party but the ras demanded that Mussolini moved decisively towards a dictatorship. This Mussolini did set out to do, but he made it clear that his party would not be his agent. It was a personal dictatorship he was aiming for and not a Fascist Party dictatorship. During 1925 to 1926 Mussolini secured his dictatorship. He had transformed the country into a one party state, could rule by decree, had created his own secret police the OVRA, formed the Fascist Tribunal and enforced press censorship so only pro-Fascist articles were published. Mussolini's personal rule was enshrined in law, the King was the only person who could take his power away, Mussolini was Duce. Mussolini's ideal Fascist state probably would not have included a Monarchy to which he still had to 'answer to', but in practice Mussolini knew he would lose support from too many people if he did. Though the King Victor Emmanuel did not oppose a threat on Mussolini; he was never asked advice and only told what Mussolini wanted him to hear. Luckily for Mussolini the King had always distanced himself from all domestic policy and by the late 1920s it has become apparent the King would not overthrow Mussolini and the Fascists. To secure his position further though, Mussolini limited the King's right to choose Prime Minister from a list compiled by the Fascist Grand Council. With Mussolini's dictatorial position secure as the 1920s progressed, he also revealed a desire to transform Italian society and even the Italian character. Being the dictator of Italy was not enough for Mussolini; he wanted to be the dictator of a state whose economy was capable of serving a war with self sufficiency and with a population of disciplined, warlike citizens. ...read more.

The organisations were made compulsory for children at state school but once again Mussolini faced the same problems as education. Mussolini also wanted to influence the adult Italians and so set up the Dopolavoro to provide leisure activities that would influence the workers towards a Fascist view of life. Mussolini also tried to change ways of life such as the Fascist salute to replace the handshake and for the banning of women wearing trousers; such rules were unenforceable and simply irritated the Italians. It seems that Mussolini fell short on creating his ideal fascist state socially too. Areas he tried to influence could not be enforced properly and the support he did gain from the public was due to effective propaganda and fear rather than recognition of real achievement. Mussolini wanted a totalitarian regime and for this to be completely achieved he needed the sincere commitment and active participation which he clearly did not have. Overall it seems that Mussolini did go some way to achieving his 'ideal Fascist state', but not nearly as much as he would have liked. It has also become clear that Mussolini only tackled problems if they were obstacles to the achievement of his principle aims; this meant problems such as the North-South divide remained. I feel he achieved his early aims of becoming the personal dictator of Italy to a high extent with the only exception of the Monarchy still in existence. It seems his later aims of restructuring the economy and social side of Italy were harder to meet and this is where he fell short of achieving the perfect Italian state. Autarky was never near and the economy was distorted by changes in economics pattern. Mussolini had hoped to transform the Italian character and society into a Fascist mould, but he was disappointed with this aspect to. The race of athletic, aggressive, obedient, Fascists never materialised and the only hold Mussolini had was over the Government. ...read more.