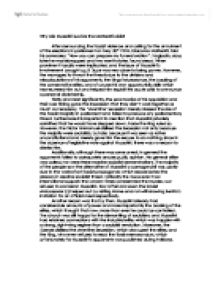 Why did Mussolini survive the Matteotti crisis?

Why did Mussolini survive the Matteotti crisis? After denouncing the fascist violence and calling for the annulment of the elections in parliament on May 30th 1924, Giacomo Matteotti, told his comrades: "Now you can prepare my funeral oration". Tragically, days later he was kidnapped and two months later, found dead. When prominent Fascists were implicated, and the issue of Mussolini's involvement brought up, Il Duce was very close to losing power. However, the managed to thwart the threats due to the divisions and miscalculations of his opponents, the Kings forbearance, the backing of the conservative elites, and of course his own opportunistic skills which maneuvered him out and helped him exploit this acute crisis to announce a personal dictatorship. ...read more.

No general strike was called, nor were there massive socialist demonstrations. The majority of the people saw the alternative of Mussolini a carnage-civil war, partly due to the work-of-art fascist propaganda which exacerbated the already in decline socialist threat. Critically the Duce even had international support; the London Times condemned the murder, but refused to condemn Mussolini. Ras Taffari and even the Soviet Ambassador (!) helped out by visiting Rome and not withdrawing Benito's invitation for an official meal respectively. Another reason was that by then, Mussolini already had considerable amounts of power and more importantly the backing of the elites, which thought that now, more than ever he could be controlled. ...read more.

To conclude, divisions and miscalculations of his opponents, the Kings forbearance, and the backing of the church as well as the conservative elites, provided the 'ground' to survive the crisis. However, it was Mussolini's resolution in the face of the threat and the ability to 'bond' and make the most out of the developments that really made the difference at the end of the day. He deduced that the Rossi memorandum destroyed the chance of his remaining as a constitutional Prime Minister and combined with the ultimatum of the ras and the already considerable possession of power and respectability, he saw authoritarianism as the way out .He therefore managed to entrench himself in power surprisingly, from a direct spin-off of what came very close to being the end of his government. ...read more.