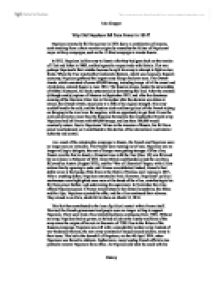 Why Did Napoleon fall from Power in 1814?

Why Did Napoleon fall from Power in 1814? Napoleon eventually fell from power in 1814 due to a combination of reasons, each resulting from a chain reaction originally caused by the failure of Napoleons' major military campaigns, such as the ill fated campaign to invade Russia. In 1812, Napoleon led his army to Russia after they had gone back on the treaties of Tilsit and Erfurt in 1808, and had agreed to reopen trade with Britain. This was perhaps Napoleon's fatal mistake because he split his army to attempt to fight on two fronts. When the Tsar rejected the Continental System, which was ruinous to Russia's economy, Napoleon gathered the largest army Europe had ever seen. The Grande Arm�e, which consisted of some 600,000 strong, including troops of all the vassal and allied states, entered Russia in June 1812. The Russian troops, (under the stewardship of Mikhail Kutuzov), fell back, systematically devastating the land. ...read more.

Of his allies, Prussia was the first to desert; a Prussian truce with the Tsar (Dec. 30) was followed by an alliance in February of 1813. Great Britain and Sweden joined the coalition, followed by Austria (August 1813), and the "War of Liberation" began, with all four nations finally agreeing to unite until France was defeated. Indeed, France's final defeat came at the hands of this force at the Battle of Nations near Leipzig in 1813. After a crushing defeat, Napoleon retreated to Paris. However, Napoleons' political weaknesses were highlighted once more at the hands of the allies, contributing to his fall from power further, and undermining his supremacy. In November the allies offered Napoleon peace if France would return to her natural boundaries, the Rhine and the Alps. Napoleon rejected the offer, and the allies continued their advance. They closed in on Paris, which fell to them on March 31, 1814. ...read more.

As a result of this fact, on April 6, 1814, Napoleon finally abdicated his throne and surrendered. He then reluctantly signed the Treaty of Fontainebleau, which exiled him to Elba. Although the treaty provided him with 2 million francs a year, and allowed him to retain the title of Emperor, under the terms of the Congress of Vienna (1814-1815), France was basically restored to its pre-1792 boundaries, and the borders of Europe were juggled so that no one nation would become too powerful. The European balance of power was re-established. In conclusion, there were several reasons why Napoleon was to fall from power in 1814, including such reasons as loss of support both internationally and domestically, however many factors that made this possible resulted from the invasion of Russia in the way that Napoleon could not police his empire due to a small army, as well as the fact that many countries under the rule of empirical France could now break free of French influence and join the likes of Britain under the coalition. Alec Cropper History ...read more.