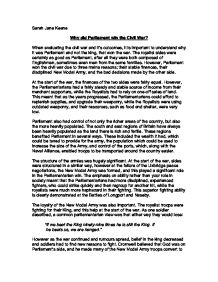 Why did Parliament win the Civil War?

Sarah Jane Keene Why did Parliament win the Civil War? When evaluating the civil war and it's outcomes, it is important to understand why it was Parliament and not the king, that won the war. The royalist sides were certainly as good as Parliament, after all they were both composed of Englishmen, sometimes even men from the same families. However, Parliament won the civil war due to three mains reasons; their stable finances, their disciplined New Modal Army, and the bad decisions made by the other side. At the start of the war, the finances of the two sides were fairly equal. However, the Parliamentarians had a fairly steady and stable source of income from their merchant supporters, while the Royalists had to rely on one-off sales of land. This meant that as the years progressed, the Parliamentarians could afford to replenish supplies, and upgrade their weaponry, while the Royalists were using outdated weaponry, and their resources, such as food and shelter, were very low. ...read more.

This superior fighting ability is clearly demonstrated at the Battles of Longport and Naseby. The loyalty of the New Modal Army was also important. The royalist troops were fighting for their King, and this help at the start of the war. As one soldier described, a common parliamentarian view was that either way they would lose: "If we beat the King ninety-nine times he is still the King. If he beats us, we are hanged." However as the war continued and rumours spread, belief in the king decreased and soldiers had to find new reasons to fight. Cromwell believed that God was on Parliament's side, and he made many of the New Modal Army troops convert to Puritanism. This way, the troops not only had a strong belief in their cause, but also a firm connection to each other. This strengthening of the troops increased moral and was one of the reasons they were nicknamed 'Ironsides'. ...read more.

However by choosing to secure other places along the route, which may have been a sensible cautionary measure, it allowed the Parliamentarians to recuperate and maneuver their troops to counter attack any strike against the capital city. Another example of bad decision making on the Royalist side is the battle of Marston Moor, where Cromwell decided to take advantage of the Royalist's bad decision and took a majority of the north of England as a result. However the main decision that Parliament took advantage of was Charles's decision to flee to Scotland when the Parliamentarians took Oxford. Due to his previous relations with the Scots, this decision planted Charles in Parliament control and effectively ended the war. To conclude, it was a number of things that enabled Parliament to win the civil war. The stable finances provided by their merchant supporters, the dedicated troops of the New Modal Army, and the poor decision making of the Royalist commanders all aided Parliament in their triumph to win the war. However it was Charles's decision to head to Scotland that gave Parliament their triumph. ...read more.