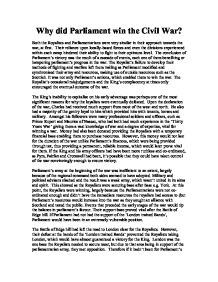 Why did Parliament win the Civil War?

Why did Parliament win the Civil War? Both the Royalists and Parliamentarians were very similar in their approach towards the war, at first. Their reliance upon locally-based forces and even the divisions experienced within each camp hindered their ability to fight to their optimum level. The conclusion of Parliament's victory was the result of a cascade of events, each one of them benefiting or hampering parliament's progress in the war. The Royalist's failure to develop their methods of fighting and warfare left them trailing as Parliament modified and synchronised their army and resources, making use of outside resources such as the Scottish. It was not only Parliament's actions, which enabled them to win the war. The Royalist's occasional misjudgements and the King's complacency at times only encouraged the eventual outcome of the war. The King's inability to capitalise on his early advantage was perhaps one of the most significant reasons for why the loyalists were eventually defeated. Upon the declaration of the war, Charles had received much support from most of the west and north. He also had a majority of the gentry loyal to him which provided him with tenants, horses and military. ...read more.

This is one modification the Royalists failed to achieve. They were still acting as independent regions, whereas Parliament was attempting to nationalise its army. Fairfax was put in total command and Cromwell in command of Cavalry. Both were ruthless and had an awareness of politics, but realised that they should not interfere in the active war effort. This was known as the 'Self Denying Ordinance'. They now had a national, professional army of 22,000 and pending attacks were synchronised and planned in such a way that they would overwhelm the Royalists. Parliament's initiative far outdid any of the Royalist's methods of combat, as Parliament was winning each battle, one by one. It's clear then that Parliament's chances of winning the entire war were increasing rapidly. The string of successes to follow the evolvement of the new model army included the Battle of Nasey in June 1645. This all but destroyed the Kings Army. One of the most devastating defeats for the Royalists was the loss of Bristol, this drove the Royalists back into the south west and Wales, reducing their catchment area. This was replicated around the country. Although both sides had not adopted a convincing method of warfare, before the restructuring of Parliaments army, the Royalists had managed to gain an early advantage despite their own misjudgements and in some cases weak leadership (Battle of Edge hill). ...read more.

With the amount of expertise within his army and the military advisers he had at hand, had he modified and strategically directed his army in the early part of the campaign and beyond, he could have possibly overcome the Parliamentarians. The King's complacency at the battle of Edge hill showed poor leadership and lack of resources. He was unable to beat the rebel group which was one of the most significant defeats of the war. Securing London would have guaranteed eventual victory but Parliament's loyal supporters prevented this from happening. The Self Denying Ordinance, the new model army of 22,000 men, who devastated the King's main army at Naseby was fundamental in Parliament's victory and the unified approach of Parliament's army was formidable because it was on a national scale and with the Royalists still fighting as regional forces it's no wonder the Royalists failed to win. To add insult to injury the amalgamation of Scottish and Parliamentary troops (due to the Solemn League and Covenant) only strengthened the already victorious Parliamentary army. It's impossible to name one event in particular. Parliament's victory was due to a chain of events, some of which were more significant than others. The combined efforts of Pym, Fairfax, Cromwell and all those within Parliament resulted in a justified victory. Katy Goff ...read more.