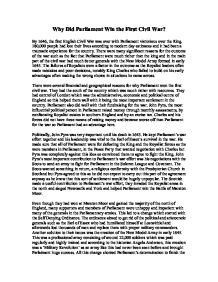 Why did Parliament win the First Civil War?

Why Did Parliament Win the First Civil War? By 1646, the first English Civil War was over with Parliament victorious over the King. 180,000 people had lost their lives according to modern day estimates and it had been a traumatic experience for the country. There were many significant reasons for the outcome of the war such as the fact that Parliament were much richer than the king and in the main part of the civil war had much better generals with the New Model Army formed in early 1645. The failures of Royalists were a factor in the outcome as the Royalist leaders often made mistakes and poor decisions, notably King Charles who failed to build on his early advantages often making the wrong choice in situations he came across. There were several financial and geographical reasons for why Parliament won the first civil war. They had the south of the country which was much richer with resources. ...read more.

Even though they had won at Marston Moor and gained the majority of the north of England, many supporters and members of Parliament were unhappy and impatient with many of the generals in the Parliamentary armies. This led to a change which started with the Self Denying Ordinance. The ordinance aimed to get rid of the political and aristocratic generals such as the Earl of Essex who had humiliated himself at Lostwithiel and afterwards lost thousands of men and replace them with proper military commanders. Another solution to their issues was the creation of the New Model Army in early 1645. This was a professional army consisting of around 22,000 soldiers which was paid regularly and highly trained and according to the historian Angela Anderson, this creation was a 'Military Revolution' as an army like this had never been seen before and brought Parlaiment huge success. All this change showed Parliament's determination to finish the war as quickly as possible as without the changes Charles still had a reasonable chance of winning the war despite his significant loss at Marston Moor. ...read more.

He also demonstrated inadequate leadership skills before the Battle of Naseby where despite not been ready and advised by Prince Rupert not to, he decided to take on the New Model Army which had disastrous consequences for him and the Royalist war effort as after this defeat, he had effectively lost the war as the surrender of Bristol and Oxford and Charles' surrender to the Scots followed. There were many important reasons for Parliament's victory in the first English Civil War such as their much better financial position, superior resources and the control of the navy but it was their annoyance and impatience with the Parliamentary army in 1644 which led to the Self Denying Ordinance and the creation of the New Model Army that was the most important reason. After these two events happened, Parliament became much stronger with 22,000 professional soldiers and were now no match for Royalist' much weaker, amateur army and the war was over in a little over a year after these vital changes to Parliament's forces. ...read more.