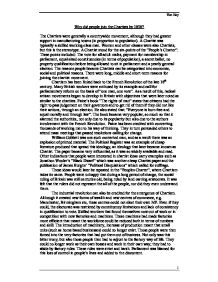 Why did people join the Chartists by 1838?

Why did people join the Chartists by 1838? The Chartists were generally a countrywide movement, although they had greater support in manufacturing towns (in proportion to population). A Chartist was typically a skilled working class man. Women and other classes were also Chartists, but this is the stereotype. A Chartist stood for the six-points of the "People's Charter". These points included: The vote for all adult males, payment for membership in parliament, equal sized constituencies (in terms of population), a secret ballot, no property qualification before being allowed to sit in parliament and a yearly general election. The reasons people became Chartists can be categorised into economic, social and political reasons. There were long, middle and short-term reasons for joining the chartist movement. Chartism has been linked back to the French Revolution of the late 18th century. Many British workers were enthused by its example and call for parliamentary reform on the basis of "one man, one vote". As a result of this, radical artisan movements began to develop in Britain with objectives that were later noted as similar to the chartists. Paine's book "The rights of man" states that citizens had the right to pass judgement on their governors and to get rid of them if they did not like their actions, through an election. ...read more.

The introduction of machinery, increase of production meant that small units (such as home based businesses) could no longer exist. Those people were then forced into the very factories that had put them out of business. Not only was this bitter irony, but also those people then had to adjust to the factory way of life. They could no longer work as their own bosses and work in their own way; they had to abide by factory rules. These rules were strict and harsh. Parliament was blamed for this loss of control in people's lives and added to the discontent. Free trade and the new political economy pushed people to Chartism. Utilitarian believed that the proper mechanism for regulating rules on behalf of unprotected workers such as women and children should be the market forces in a free trade economy. Also, the encouragement of free trade (despite creating more jobs for the doubling population) was a threat to "old" work practices and perceptions of rights. An example of this kind of attack is the removal of the apprenticeship regulations in1813-14 (i.e. skilled workers - large support base for Chartism). Owenism was a method of working in factories co-operatively through incentives, not threats and punishment. ...read more.

The Chartists were outraged as an extract of The Northern Star demonstrates: "The new act was passed... to place the whole labouring classes at the utter mercy and disposal of the moneyed or property owning classes." Protests in Northern England were held where the building of workhouses was physically halted. Mass meetings were also held in West Yorkshire where direct support for Chartism was given. The return of the economic depression coincided with the height of radical/chartist activity. The depression brought wage cuts, short-term unemployment and short time working. Bread prices rose, as did wheat which made feeding ones family very difficult for the working classes. Chartism is often referred to as a "knife and fork" question, that is when people are hungry they turn to Chartism as a means to fill their stomachs. The statistics show that Chartism has most support in times of economic depression and misery. Despite these short-term economic factors that really pushed Chartism by 1838, other social factors influenced the support of Chartism. Cholera was strife; people were unemployed, hungry and the government taxed radical publications in what became known as the war of the unstamped. It was for these reasons that people became politically active; it was their only legitimate hope of living on their feet rather than on their knees. Tim Hoy 1 ...read more.