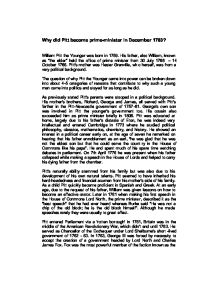 Why did Pitt become prime-minister in December 1783?

Why did Pitt become prime-minister in December 1783? William Pitt the Younger was born in 1759. His father, also William, known as "the elder" held the office of prime minister from 30 July 1766 - 14 October 1768. Pitt's mother was Hester Grenville, who herself, was from a very political background. The question of why Pitt the Younger came into power can be broken down into about 4-5 categories of reasons that contribute to why such a young man came into politics and stayed for as long as he did. As previously stated Pitt's parents were stooped in a political background. His mother's brothers, Richard, George and James, all served with Pitt's farther in the Pitt-Newcastle government of 1757-61. George's own son was involved in Pitt the younger's government too. His cousin also succeeded him as prime minister briefly in 1806. Pitt was educated at home, largely due to his father's distaste of Eton, he was indeed very intellectual and entered Cambridge in 1773 where he studied political philosophy, classics, mathematics, chemistry, and history. ...read more.

Although he made speeches rarely they were usually to great effect. Pitt entered Parliament via a 'rotten borough' in 1781, Britain was in the middle of the American Revolutionary War, which didn't end until 1783. He served as Chancellor of the Exchequer under Lord Shelburne's short-lived government of 1782 - 83. In 1783, George III was forced by necessity to accept the creation of a government headed by Lord North and Charles James Fox. Fox was the most powerful member of the faction known as the Rockingham Whigs, a group of men who were slaves to the Whig myth that politics was a battle between a pure House of Commons and a corrupt Monarchy - hence they were George's biggest critics. When Fox introduced the East India Bill which proposed nationalisation, to which the king was strongly opposed, the king ensured its defeat in the Lords and then dismissed the government. Even though this decision was deemed controversial and unconstitutional the king argued his actions were justifiable. ...read more.

of his natural talent and that in his brief parliamentary career he had made a strong impact, Pitt's family name was of great importance to the king to as it had a political reputation of trust and although the king and Pitt the elder had not always seen eye to eye he was not a whig. It could be argued that the king is the main reason for Pitt becoming prime minister at the young age of 24, because of his age comments were made such as;"a sight to make all nations stand and stare: a kingdom trusted to a schoolboy's care. On the face of it it does seem, as he was, he dismissed the Fox/North coalition and when it was clear that Shelburne had to go, the king almost hand-picked him, but the reason behind the king's appointment of Pitt serve as more important reasons, Pitt's family connection, his own ability, the political instability of the time and the Fox/North coalition discion to go against the king, who at the that time, could actively decided on who was to be Prime minister. ...read more.