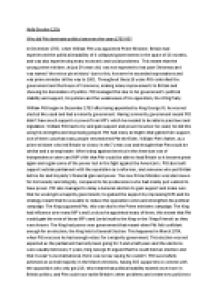 ﻿Holly Stocker 12Cb Why did Pitt dominate politics between the years 1783-93? In December 1783, when William Pitt was appointed Prime Minister, Britain had experienced the political instability of 4 collapsed governments in the space of 18 months, and was also experiencing many economic and social problems. This meant that the young prime minister, at just 24 years old, was not expected to last past Christmas and was named ?the mince pie ministry? due to this, however he exceeded expectations and was prime minister all the way to 1801. Throughout these 18 years Pitt controlled the government and the House of Commons, making many improvements to Britain and showing his domination of politics. Pitt managed this due to his government?s political stability and support, his policies and the weaknesses of his opposition, the Whig Party. William Pitt began in December 1783 after being appointed by King George III, he was not elected like usual and had a minority government. Having a minority government meant Pitt didn?t have much support or power from MP?s which he needed to be able to pass laws and legislation. William Pitt had to try and gain support and power however he could, he did this using his strengths and impressing people. ...read more.

Pitt went on to tackle the high price of living in Britain, he did this by reducing import duties and making treaties with other countries. One example of this is the Eden Treaty with France in 1786, prices of French goods were reduced in price and the French market was open to more British goods which helped both countries. Pitt also introduced bonded warehouses where colonial goods were kept before re-export, this meant merchants didn?t have to pay import duties which increased their profit. He introduced the Hovering Act in 1787, which meant that any ship not coming into British port had to stay 12 miles out from shore, this made smuggling more difficult, which also benefited merchants. All of these reasons boosted support for Pitt, traders felt confident and he gained support from Merchants and consumers, whose cost of living had been reduced. The Royal Navy was in an extremely bad condition when Pitt became Prime Minister and Pitt worked with Admiral Lord Howe to get the Navy back in working order, in the 5 years between 1783 and 1788 the Royal Navy had 33 new major warships and by this time all the repairs had been done and there were over 90 ships ready for action. ...read more.

The Whigs who supported Fox and the ideas of revolution were the Foxite Whigs, many said they were unpatriotic and irresponsible for not condemning the French violence and massacres, and this weakened support for the Whigs. Another Whig party formed, opposing the Foxite Whigs, these were the Conservative Whigs and they thought that a revolution like the one in France would lead to chaos and violence in Britain. The Conservative Whigs thought that the revolutionary ideas of Fox were too much and had less revolutionary ideas. Pitt used this division in the opposition as an advantage, he offered jobs to the conservative Whigs and they then sided with him, this increased his support massively and weakened the Whigs. These tactics of gaining the support of the Conservative Whigs was key to Pitt having political domination. Overall I think that the main reason for Pitt?s domination of politics in the year 1783-93 was his political stability and support, he wouldn?t have been able to dominate politics or succeed as Prime Minister without the support of the King and the MP?s. The policies he created and the weaknesses of the opposition are also extremely important and follow very closely behind his political stability and support, but Pitt would not have become Prime Minister in the first place without the support he had, especially from King George III. ...read more.