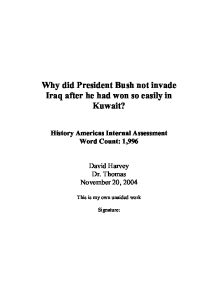 Why did President Bush not invade Iraq after he had won so easily in Kuwait?

afford to risk his relationships around the world to take over a country that the majority of people felt was best left alone. Part C: Evaluation of Sources Clancy, Tom. Into the Strom: a study in command. (New York: G.P. Putnam's Sons, 1997) Summers, Harry. A Critical Analysis of the Gulf War. (New York: Dell Publishing, 1992) Into the Storm, and A Critical Analysis of the Gulf War, are both books written on the Gulf War by two men who are very knowledgeable in war, but for very different reasons. Tom Clancy, who wrote Into the Storm, is one of the most well-known writers of military fiction in the world, and has written countless books that have made the best-seller list. The thesis of this secondary source is that the US did not invade Iraq as it would have cost too much money, and the US was in no position to continue spending the amounts they were spending daily on the war effort. Clancy uses many speeches and financial figures to support his point by showing how much trouble the US was in. Clancy is traditionally a fiction writer who usually writes novels about wartime situations, which could indicate that some of his points are exaggerated for effect. ...read more.

The final reason Bush did not take out Saddam is that it would have taken too much work and too much time to install a new government and to maintain it once Saddam's regime was gone. To find Saddam would have taken perhaps months and many American soldiers' lives would have been lost.22 Once he was found and extradited from the country, a new government would have had to be put in his place. A problem would have arisen however, as to what religion should the new government be, Shiite, Kurdish, Muslim, or Sunni? Once that decision was made, there would inevitably be some sort of uprising and therefore American troops would have to remain in Iraq indefinitely to maintain the peace, costing even more lives.23 This serves as a perfect explanation of why Bush is now invading Iraq, he is simply finishing his father's work. This also explains why Saddam continued his atrocious acts; he knew he could get away with it without any repercussion. Part E: Conclusion In Conclusion, President Bush did not invade Iraq, because it would have reflected negatively on the country in the international scene by giving it the appearance of an imperialist nation taking over anyone it wanted. This issue is significant because it helps to explain the actions of the current President and his foreign policy. ...read more.