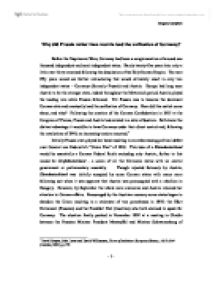 Why did Prussia rather than Austria lead the unification of Germany?

Why did Prussia rather than Austria lead the unification of Germany? Before the Napoleonic Wars, Germany had been a conglomeration of around one thousand independent and semi-independent states. Barely twenty-five years later only a little over thirty remained following the dissolution of the Holy Roman Empire. The next fifty years would see further restructuring that would ultimately result in only two independent states - Germany (formerly Prussia) and Austria. Europe had long seen Austria to be the stronger state, indeed throughout the Metternich period Austria played the leading role while Prussia followed. Yet Prussia was to become the dominant German state and eventually lead the unification of Germany. How did this switch come about, and why? Following the creation of the German Confederation in 1815 at the Congress of Vienna, Prussia and Austria had existed in a state of dualism. Both knew the distinct advantage it would be to have Germany under their direct control and, following the revolutions of 1848, an increasing tension mounted.1 Initially Prussia over-played her hand resulting in an embarrassing political defeat over General von Radowitz's "Union Plan" of 1849. This idea of a Kleindeutschland would be essentially a German Federal Reich excluding only Austria; further to this would be Gro�deutschland - a union of all the Germanic states with no central government or parliamentary assembly. Though rejected furiously by Austria, Kleindeutschland was initially accepted by some German states with many more following suit when it was apparent that Austria was preoccupied with a rebellion in Hungary. However, by September the rebels were overcome and Austria returned her attention to German affairs. ...read more.

This is first seen when Bismarck expertly capitalises on a wave of nationalistic support from nationalists and liberals alike during the Danish War. He was then able to ride this wave to bolster Prussia's position in Europe. Considering a military showdown with Austria as inevitable (perhaps even desirable), Bismarck proceeded to woo Napoleon III of France by promising him concessions in the Rhineland if France would stay out of an Austro-Prussian war. Napoleon also tried to twists circumstances to favour France by secretly negotiating a treaty with the Habsburgs. Bismarck's next step was to certify that Italy would not be a threat, and he ensured her cooperation in return for Venetia on the event of Austria's defeat. The last country that Prussia had cause of concern over was Russia. Luckily Austria had already alienated her over the Crimean War and Russian neutrality was easily assured by the Alvensleben Convention of 1863. In this way we can see Bismarck systematically isolating Austria, while all around, at the same time, the two states were desperately endeavouring to outmanoeuvre each other over the question of the duchies.9 It seems that Bismarck showed a calculated moderation and clemency in his treatment of Austria after victory by restraining the officer corps from pushing on to Vienna and by not placing large reparations or territorial losses upon the defeated country.10 It may be that he realised he would need the support of the south German states (many of which had been allied with Austria); furthermore an over-exertion of power may have provided France and Russia with a reason to enter the conflict - something Bismarck had taken careful steps to avoid. ...read more.

Austrian minister Schwarzenberg, realising the political implications of an economically superior Prussia, attempted to extend the customs union into a Zollunion in 1849. Failing in this, he attempted to create an alternative trade area but was unsuccessful in this too. The exemption from western European economy was a considerable burden to bear, and the Austrian economy soon descended into difficulties, particularly following the Crimean War in 1856, ultimately dooming her to a back-seat in the future developments of the European theatre of diplomacy.20 It seems clear that Bismarck played an integral part in securing Prussia's dominance over Austria and ultimately in bringing about the unification of Germany. But the question of 'how much' is a topic of great historiographical debate. John Breuilly argues that Bismarck was an 'outsider' and that circumstances changed in his favour, rather than them being brought about by his diplomatic genius and manoeuvring. A.J.P. Taylor propounds a similar story suggesting that although Bismarck was a great statesman, he was not a 'system-maker in the sense that Metternich had been', but was rather a man of the laissez-faire age: a man that took every opportunity that showed itself.21 It is also sometimes easy to overlook the fact that Bismarck was a patriot of Prussia and not Germany. Throughout his time in power, his first priority was always Prussia - the unification was a means to glorify Prussia. Prussia's tactical needs had encouraged Bismarck to adopt German nationalism and the resultant rivalry with France meant he had to complete the nationalist agenda. Austria's time had come to an end two decades earlier at the end of the Metternich era: doomed to a period of unclear leadership, muddled direction and a complete lack of the nationalist identity required to excite such unification. ...read more.