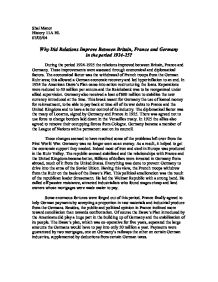 Why Did Relations Improve Between Britain, France and Germany in the period 1924-25?

Shai Manor History 11A HL 07/03/04 Why Did Relations Improve Between Britain, France and Germany in the period 1924-25? During the period 1924-1925 the relations improved between Britain, France and Germany. These improvements were assessed through economical and diplomatical factors. The economical factor was the withdrawal of French troops from the German Ruhr area; this allowed a German economic recovery and led hyperinflation to an end. In 1924 the American Dawe's Plan came into action restructuring the loans. Reparations were reduced to 50 million per annum and the Reichsbank was to be reorganized under allied supervision. Germany also received a loan of 800 million to stabilize the new currency introduced at the time. This break meant for Germany the use of loaned money for reinvestment, to be able to pay back at time all of its war debts to France and the United Kingdom and to have a better control of its industry. ...read more.

This political amelioration was the result of the republican leader Stresemann. He led the Weimar Republic with a strong hand. He called off passive resistance, attracted industrialists who found wages cheap and land owners whose mortgages were made easier to pay. Some enormous fortunes were forged out of this period. France finally agreed to help German payments by accepting a proportion in raw materials and industrial produce from the Germans. Besides, the public and political opinion in France inclined more toward conciliation than towards confrontation. Of course the Dawe's Plan introduced by the Americans did play a huge part in the building up of Germany and the stabilization of its people. The Dawe's plan, which was co-operative for five years, separated the large amounts the Germans would have to pay into only 50 million a year. Payments were guaranteed by two mortgages, one on Germany's railways the other on certain German industries, supplemented by deductions from certain German taxes. ...read more.

These new governments did not want war; they did not hate the Germans as much as the former governments did. Therefore the relations could improve drastically. The French were now led by Briand and the British by MacDonald. There two wise men wanted to improve their relations with Germany. They did not want to cripple Germany so then they could not pay reparations. The Briand signed a pact with the Americans, The Kellogg-Briand Pact, which later got signed by 62 countries. This pact renounced war, and stated that problems should be solved diplomatically. So the Locarno Pact agreed by Germany, France, Britain, Italy and Belgium (October 1925) apart from guaranteeing the current western borders of Germany, recognized France's treaty commitments to Poland and Czechoslovakia. These golden years of reparation with the allies receiving payments in cash and in materials would last for ever as the Germans could repay their war debts in return to the USA. In many respects, Germany put all its eggs in the American basket and if something happened there, a political and financial collapse would kill Germany. 912 words ...read more.