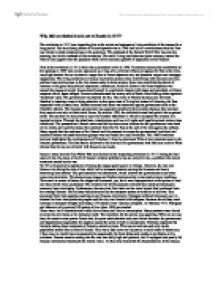 why did revolution in russia break out in 1917

Why did revolution break out in Russia in 1917? The revolution in 1917 was impending due to the unjust and oppressive living condition of the masses for a long period. The humiliating defeat of Russo-Japanese war in 1905 had led to a revolutionary that the Tsar was forced to make compromises to his autocracy. The outbreak of the Second World War was also the drawing line for the outbreak of the revolution. The awful living conditions and poor economy caused the Tsar to lose support from the peasants which led to numerous growth of opposition to the Tsarism. Prior to the revolution in 1917, there was a premature revolt in 1905. Numerous reasons that contributed to the uprising in 1905 were severe repression as it was still a criminal offence to oppose the Tsar at the time, very high taxation but no increase in wages due to Russo-Japanese war, and peasants anger over mortgage repayments. The living conditions in Russia was horrid; prisons were overflowing with innocent convicts, soldiers were running lose in the city streets ready to shoot anyone, there was overwhelming denial of freedom of religious and political expression. urthermore, Russia's defeat in the Russo-Japanese war caused the masses to revolt. Russia found herself in a territorial dispute with Japan and provoked a military response which Japan obliged. ...read more.

The gold standard was abandoned, which allowed the government to put more notes into circulation. This helps to pay wages and further commerce but it also made money worthless. This result in severe inflation; the wages had increased, yes, but it was disproportional to the prices of food and fuels which were quadrupled. The inflation led for the peasants to hoard their stock preventing the economy from circulating. Furthermore, the army had first claim on the more limited food produced from the average Russian. The military had priority to use the transport system to mobilize in the war. This prevented from food supplies reaching to any Russian community. Petrograd suffered immensely as it is situated far from food-producing region and the city was flooded with refugees. Because the military used railways to transport freights and troops, 575 stations were virtually collapsed. In February 1917, Petrograd and Moscow only received 300 grains of rice when 1000 was needed. There was a lot of dissatisfaction within the military itself due to conscription. Many peasants were forced to enlist the arm forces or do industrial work. The condition for the armies was appalling. While no one can deny the massive man power Russia had, the poor administration and poor liaison between the government and departments responsible for supplies caused the army to lack in equipments. ...read more.

The duma then formed the Progressive Bloc which is a combined effort from the nationalists, Industrialists, Octoberists, and the Kadets. The people within Nicholas' government had collectively persuaded him to make concessions which he stubbornly refused. This only showed that the Tsar is incapable of running the war and the Bloc. The Tsar made a big mistake by refusing to cooperate with non-governmental organizations such as Union of Zemstvos and the Union of Municipal Councils. This elected bodies joined to be Zemgor. This organization highlighted Nicholas' failures and convinced the masses they are an alternative for the Tsar autocracy. Some may argue that the 1917 revolution was imminent and a long time coming. It is arguable that the Tsar had opportunities to save his autocracy. His biggest political resistant, the Bloc, whom was initially his supporters could've helped him improve the situation in regards to war. The general public was not necessarily looking to overthrow the government but rather was dissatisfied with the tsar's inaction to improve the conditions. In other words, they were rebelling against their situation and not their government. It wasn't until later years with the war and the tsarina that the people started to lose faith in their government. Rise of Zemgor did not help the situation either. Biggest Nicholas was stubborn and ineffective as a leader, the people of Russia decided that it was time they needed a new and better leader. ...read more.