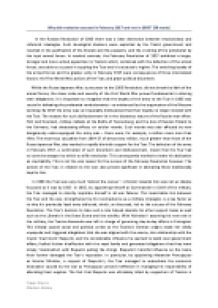 ﻿Why did revolution succeed in February 1917 and not in 1905? (30 marks) ________________ In the Russian Revolution of 1905 there was a clear distinction between revolutionary and reformist ideologies. Such ideological divisions were exploited by the Tsarist government and resulted in the pacification of the liberals and the peasants, and the crushing of the proletariat by the loyal armed forces. In marked contrast, the February Revolution of 1917 exhibited a larger, stronger and more united opposition to Tsarism which, combined with the defection of the armed forces, was able to succeed in toppling the Tsar and his autocratic regime. The switching loyalty of the armed forces and the greater unity in February 1917 were consequences of three interrelated factors: the First World War; actions of the Tsar; and grave political discontent. Whilst the Russo-Japanese War, a precursor to the 1905 Revolution, did not break the faith of the armed forces, the sheer scale and severity of the First World War proved fundamental in altering their allegiances. It is important to recognise that the loyalty of the army to the Tsar in 1905 was crucial in defeating the proletariat revolutionaries ? as evidenced by the suppression of the Moscow Uprising. ...read more.

This initially caused social and political unrest as the Tsarina?s German origins made her wildly unpopular and triggered allegations that she was aligned with the enemy. Her relationship with the mystic ?mad monk? Rasputin, and the considerable influence he seemed to wield over government affairs, fuelled further disaffection with the royal family and generated allegations that they were simply ?marionettes? with Rasputin pulling the strings. Rasputin?s harmful influence on the home front further damaged the Tsar?s reputation. In particular, by appointing Alexander Protopopov as Interior Minister, a request of Rasputin?s, the Tsar managed to exacerbate the economic dislocation caused by the war as Protopopov proved ineffective in managing his responsibility of allocating food supplies. The fact that Rasputin was ultimately killed by supporters of Tsarism is a testament to his unpopularity and the out-of-sync nature of the Tsar and Tsarina. Whilst not becoming ?revolutionaries?, both the Liberals and the nobility viewed the Tsar as an obstacle for the survival on monarchic rule. In 1905 the Tsar managed to survive by appealing to the Liberals, thus dividing the opposition. The refusal of the Provisional Government (formed out of the State Duma) ...read more.

Unlike in 1905 where there was ideological disunity, exploited by the Tsar, in February 1917 there was a collective agreement across all groups in Russian society that the Tsar needed to be gone. To conclude, the Russian Revolution of 1905 failed as a result of the appeasement of the Liberals (and peasants), and the subsequent crushing of the proletariat by the loyal military. The February Revolution of 1917 succeeded on the grounds that, firstly, the army?s loyalties ?no longer resided with the Tsar?, and secondly, that the Liberals wished not for compromise with the Tsar, but to overthrow him. The change in attitudes of these two groups, traditionally loyal to the Tsar, can be attributed primarily to the First World War and the Tsar?s actions. If the war wasn?t damaging enough to the Tsar, his decision to take a ?front seat? in military affairs further diminished his support from the army. With regards to the Liberals, there were ultimately no political concessions he could make to hold onto power. In the words of historian Edward Action ? ?by stubbornly refusing to reach any modus vivendi with the Progressive Bloc of the Duma... Nicholas undermined the loyalty of even those closest to the throne [and] opened an unbridgeable breach between himself and public opinion." Mark: 28/30 Grade: A Fraser Morris Modern History ...read more.