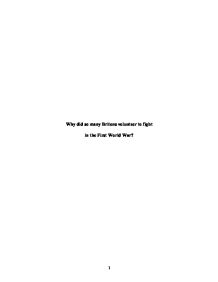 Why did so many Britons volunteer to fight in the First World War?

Why did so many Britons volunteer to fight in the First World War? Countries go to war for many reasons. Be it the moral rights of the people of their own or a foreign country, trade and their own economy or fear of attack from another. But why do men go to war? Is it the adventure, the sense of danger or the legalised murder of another human being? Do they feel it is their patriotic duty for King (or Queen) and country? This essay will highlight the main reasons that Britain did not have to resort to conscription until 1916, due to the amount of volunteers' at the start of the 1st World War. Britain in the main is an island, a united island since 1706 and the Act of Union which saw Scotland join England and Wales and formed Great Britain. 1800 saw Ireland also join this union and the British Isles was formed. Their nearest neighbour and enemy was France. With a powerful navy to patrol the waters and prevent attack, it was felt that there was no need to maintain a large army and therefore a small well equipped, well trained volunteer force would suffice. Before the 1st World War, there were several small wars around the empire that involved British troops. ...read more.

This massive recruitment also caused problems of its own. At the start of the war, the army could not provide enough uniforms and weapons for every man who enlisted. The Pal battalions especially, once formed then stayed and trained often with broomsticks as rifles, within their local recruitment area until the army called for them to attend official training. Industry also started to suffer. The amount of workers that had enlisted led to a shortage on the factory floor which in turn led to employment for women. This war was a decisive moment in the emancipation of women.5 Women for the first time started working in factories other than cotton mills. From munitions to engineering, women worked along side men, not always though on equal pay. Women were also pressured in other ways to send their men to war. Propaganda played a large role in the recruiting of men for the armed forces. Posters were produced, encouraging men to join up and serve their King. Some posters were deliberately aimed at women, accusing them of holding their men folk back. "1.You have read what the Germans have done in Belgium. Have you thought what they would do if they invaded this country? 2. Do you realise that the safety of your home and children depends on our getting more men NOW? ...read more.

Conscription was finally passed by the government in January 1916 on unmarried men between the ages of 18-41.12 However conscription did not provide the same amount of recruits as voluntary enlistment had done. More men found themselves in "reserved" occupations, this did not appease the Generals, but it kept the British industrial machine running. This was a valuable lesson learnt. Conscription was enforced at the beginning of World War Two thus preventing labour shortages just as the country was mobilising. The First World War lasted a total of fifty two months. Just fewer than five million men joined the British army from within the United Kingdom. During the first fifteen months of war, approximately half that amount volunteered to fight for King and country. Men volunteered for a variety of reasons. Patriotism, to fight for your country, financial gain and better living standards, adventure to do things that are not normally available to Mr. Average, and to do it with friends and colleagues. Least of all the shame of not having gone to war. To fight for your country and die is honourable. To fight for your country and live is self satisfying and humbling. Not to fight for your country is ? The majority of soldiers that return home from a victorious war receive a hero's welcome, but for many, in their own eyes they are not. . ...read more.