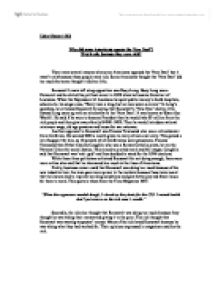 Why did some Americans oppose the 'New Deal'? Was it only because they were rich?

Uday Chana 11K3 Why did some Americans oppose the 'New Deal'? Was it only because they were rich? There were several reasons why some Americans opposed the 'New Deal' but it wasn't only because these people were rich. Some Americans thought the 'New Deal' did too much but some thought it did too little. Roosevelt's main left wing opposition was Huey Long. Huey Long was a Democrat and he started his political career in 1928 when he became Governor of Louisiana. When the Depression hit Louisiana he spent public money to build hospitals, schools etc. his slogan was, "Every man a king, but no man wears a crown." In Long's speeches, he criticised Roosevelt by saying that Roosevelt's 'New Deal' did too little. Instead Long came up with an alternative to the 'New Deal'. It was known as 'Share Our Wealth'. He said if he were to become President then he would take $3 million from the rich people and then give every family $4000- 5000. Then he would introduce national minimum wage, old age pensions and house for war veterans. ...read more.

I ruined health. And I put screws on the rich man's wealth." Secondly, the rich also thought that Roosevelt was doing too much because they thought he was taking their money and giving it to the poor. The rich thought that Roosevelt was wasting taxpayers' money. Many of the rich hated Roosevelt because he was taking what they had worked for. Their opinions expressed in magazines read by the rich. "As a social and economic class we, who have lived or tried to live in any part on money saved, are being liquidated." Harpers Magazine 1935 "...members of the so-called upper- class frankly hate Franklin Roosevelt" Time Magazine 1936 The opposition also thought that Roosevelt was doing too much because they thought it was morally wrong to destroy crops when the other Americans were starving. Similarly, they felt it was morally wrong to pay dole money because it encouraged dependency and discouraged the 'rugged individualism' on which the Americans Dream was supposed to be based. Republicans thought that the New Deal was dangerous. ...read more.

Now because of Roosevelt's 'New Deal', the states thought that the Federal Government was trying to take over by making too many laws, laws that were supposed to be made by the states. The campaigners for the 'States Rights' showed anger by objecting to the schemes like the TVA and other alphabet agencies. Some of Roosevelt's oppositions also came from the Supreme Court. In 1935- 36, the nine judges that were appointed for life decided that several of Roosevelt's 'New Deal' laws were illegal and broke the constitution (unconstitutional). This proved that he was trying to do so much that his laws were breaking the constitution. The right wing also said that Roosevelt was doing too much when Eleanor Roosevelt spoke out for the poor and unemployed. They said that she should only remain at her husband's side and not take part in any political affairs, for example make speeches etc. because it was not her job. Critics from the right (not only the rich) opposed the 'New Deal' because they thought it was doing too much. The opposition was therefore quite diverse, with different political opinions and economic interests represented. The rich were prominent and vocal, but they were not really Roosevelt's only opponents. ...read more.