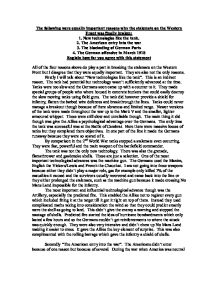 Why Did Stalemate Develop On The Western Front?

The following were equally important reasons why the stalemate on the Western Front was finally broken: 1. New technologies like the tank. 2. The American entry into the war 3. The blockading of German Ports 4. The German offensive in March 1918 Explain how far you agree with this statement All of the four reasons above do play a part in breaking the stalemate on the Western Front but I disagree that they were equally important. They are also not the only reasons. Firstly I will talk about "New technologies like the tank". This is an indirect reason. The tank had potential but technology wasn't sufficiently advanced at the time. Tanks were too slow and the Germans soon came up with a counter to it. They made special groups of people who where housed in concrete bunkers that could easily destroy the slow moving tanks using field guns. The tank did however provide a shield for infantry, flatten the barbed wire defences and breakthrough the lines. Tanks could never manage a breakout though because of there slowness and limited range. Newer versions of the tank were made throughout the war up to the Mark V and the smaller, lighter armoured whippet. ...read more.

It gave the Allies the key element of surprise. This was also complimented with the rolling barrage which gave the infantry a shield of shells. Secondly "The American entry into the war". The Americans didn't enter because of one reason but because of several. During the war when America was neutral on May 1, 1915 Lusitania left New York for the final time. A number of Americans were aboard, including the wealthy Alfred Vanderbilt and noted theatre producer Charles Frohman. On May 7 with the coast of Ireland in sight, German U-boat U-20 torpedoed Lusitania. Sinking in eighteen minutes with the loss of 1,195 lives - 123 of them American. This incident really turned the American people against the Germans. This was not helped by a secret telegram sent by the Germans to the Mexicans which was intercepted by the British and decoded. It was sent by Zimmerman the German foreign minister on the 15th March telling Mexico to attack the USA. Germany wanted them to reclaim all their rightful states like Arizona, Colorado, Texas; America declared war on Germany on April 6th 1917. They had massive problems mobilising their army that finally arrived in Europe on May 1st. ...read more.

Also some troops deserted because they had lost faith in there generals. The surviving troops suffered from incredibly low morale, severe exhaustion and depression and weapons and munitions availability declined enormously and because of this the troops concentrated on looting food and weapons from overrun Allied supply dumps rather than preparing for the Allied counter attack. Another crucial error General Ludendorf made was that he had no cavalry to exploit the breakout and he didn't move his artillery up quick enough to protect his remaining troops. He couldn't secure his positions and this is where it started going downhill for the Germans. I conclude therefore that "The American entry into the war" and "The blockading of German Ports" were the two most important reasons. The Americans gave the Allies unlimited amounts of men and resources. The Germans couldn't fight a lasting war because of lack of resources and this is why they attempted their massive offensive in 1918 to win the war at a stroke before the Americans got there act together. The reason they couldn't fight a lasting war was because of the Blockade which stopped them getting food and resources in large quantities that they desperately needed. This is why I disagree with the title. ...read more.