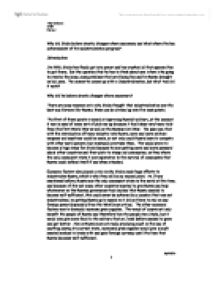 Why did Stalin believe drastic changes where necessary and what where the key achievements of his industrialisation program?

Why did Stalin believe drastic changes where necessary and what where the key achievements of his industrialisation program? Introduction Its 1928, Stalin has finally got into power and has crushed all that opposed him to get there. But the question that he has to think about now is how is he going to resolve the many, many problems that are facing him and his Russia brought on by Lenin. The answer he comes up with is Industrialisation, but why? And did it work? Why did he believe drastic changes where necessary? There are many reasons as to why Stalin thought that industrialisation was the best way forward for Russia; these can be divided up into five main points. The first of these points is aimed at improving Russia's military, at the moment it was in need of some sort of pick-me-up because it had taken very heavy tolls from the First World War as well as the Russian Civil War. The plan was, that with the introduction of heavy industry into Russia, more and more military weapons and munitions could be made, so not only could Russia learn to compete with other world powers, but eventually overtake them. This would prove to become a huge issue for Stalin because he was getting more and more paranoid about other countries and their plots to stamp out communism, as ...read more.

This is therefore going to be my fourth point. Stalin needed to make sure that the people of Russia looked up to him and respected him as a leader. In order to do this he had to do something drastic, industrialising Russia was just the move he needed so that historians would compare Stalin to Lenin and make the people believe he was a great leader. Of course Stalin was not only looking out for himself, although certain historians would beg to differ. My fifth and final point is that he wanted a better life for the people of Russia, because in a communist society the people are Russia. Industrialisation would help to improve living standards many times over. Not only would this help keep him in power by keeping the people happy, but it is also set an example for the democratic societies in the West, this might help spread communism to other parts of the world. What where the key achievements of his industrialisation program? Now that we have looked at the aims of industrialisation in Russia, it is time to look at the outcomes and whether they where a success or not. Stalin had three sets of five-year plans set out with the overall aim to make Russia an industrial power at the end of the fifteenth year. ...read more.

The third and final five-year plan (January 1938 to June 1941) was cut short because of Russia's entry into the Second World War. Heavy industry was still on the increase and due to the war, more defence and armaments where produced. Possibly because of the war, there where more failures in the third plan than in the other ones. Steel output was not high enough, oil production did not meet targets and a fuel crisis ensued, consumer industries not surprisingly took a back seat again and many factories ran short of materials. I believe it is unfair to judge this plan with the other ones because of the war, natural events like a really bad winter did not help the Russian industrialisation bid. Conclusion It is very hard to judge whether or not Stalin's plans where a success or not. Looking back at the reasons and comparing them to the successes, the military targets where met (Russia winning the war proves this), the economic targets where very close to being met with Russia nearly gaining full self-sufficiency, I don't believe the Ideological task was met because Stalin becoming a dictator somewhat detracts from communist ideals, I believe his own credentials where boasted by it all, and I also believe that for a while before the war living stands where improved ever so slightly so that was also a success. ?? ?? ?? ?? Toby Osbourn 13 EB History 28/04/07 1 ...read more.