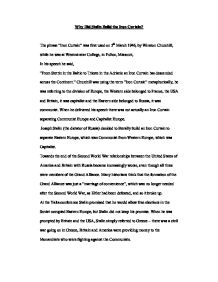 Why Did Stalin Build the Iron Curtain?

Why Did Stalin Build the Iron Curtain? The phrase "Iron Curtain" was first used on 5th March 1946, by Winston Churchill, while he was at Westminster College, in Fulton, Missouri, In his speech he said, "From Stettin in the Baltic to Trieste in the Adriatic an Iron Curtain has descended across the Continent." Churchill was using the term "Iron Curtain" metaphorically, he was referring to the division of Europe, the Western side belonged to France, the USA and Britain, it was capitalist and the Eastern side belonged to Russia, it was communist. When he delivered his speech there was not actually an Iron Curtain separating Communist Europe and Capitalist Europe. Joseph Stalin (the dictator of Russia) decided to literally build an Iron Curtain to separate Eastern Europe, which was Communist from Western Europe, which was Capitalist. Towards the end of the Second World War relationships between the United States of America and Britain with Russia became increasingly worse, even though all three were members of the Grand Alliance. ...read more.

The Communists won the civil war. In the First World War and in the Second World War, Russia was left alone to fight Germany in the East. In both the wars Russia had huge loses of weapons and infantry. Russia felt that the USA and Britain used Russia to their own advantage, in the Second World War, while Russia was fighting Germany the USA and Britain were building up forces and preparing an attack. Western powers were also slow to join the USSR in an alliance against Hitler At Yalta Stalin had agreed that three months after Germany had been defeated, he would attack Japan. Before he could do this, the Americans dropped an atomic bomb on Japan without telling Russia. Stalin knew that America were developing the atomic bomb (due to his spies) Stalin was suspicious and afraid. Why didn't America tell him? After all they were both in an alliance and Britain had known about the bomb before it was dropped. ...read more.

The USSR had undergone many wars and conflicts in the past century and Stalin needed to protect Russia, by taking over countries around Russia and turning them into Communists countries, which would support Russia, he was making a buffer zone. Stalin was afraid that the Capitalist influence of the rest of the World would influence the Communist people, Stalin sincerely believed that Communism was a better idea for the Russian people, he therefore built a thousand mile iron fence to protect the Russians from what he believed was immoral ideology. The Iron curtain had many effects. Germany, a country which has been suffered for severe deprivation and squalor, disadvantaged in the past with two wars and a treaty, which crushed the countries economy and morale is now torn apart, divided in two. A country of which half is made to believe that communism is a bad thing and Capitalism should dominate the world and the other half is made to believe the opposite. ...read more.