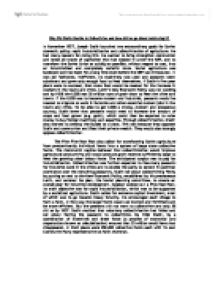 Why Did Stalin Decide to Collectivise and how did he go About Achieving It?

Why Did Stalin Decide to Collectivise and how did he go About Achieving It? In November 1927, Joseph Stalin launched two extraordinary goals for Soviet domestic policy: rapid industrialization and collectivization of agriculture. He had many reasons for doing this. He wanted to bring strengthen communism and erase all traces of capitalism that had seeped in under the NEP, and to transform the Soviet Union as quickly as possible, without regard to cost, into an industrialized and completely socialist state. Soviet agriculture was backward and had been for a long time even before the NEP was introduced. It was old fashioned, inefficient, no machinery was used and peasants were subsistent and grew only enough food to feed themselves. ...read more.

To be able to get USSR a strong, modern and prosperous country, Stalin knew that peasants would need to increase the amount of crops and food grown (e.g. grain), which could then be exported to raise money to buy foreign machinery and expertise. Through collectivization, Stalin also wanted to destroy the Kulaks as a class. This was because they opposed Stalin and communism and liked their private wealth. They would also strongly oppose collectivization. The First Five-Year Plan also called for transforming Soviet agriculture from predominantly individual farms into a system of large state collective farms. The Communist regime believed that collectivization would improve agricultural productivity and would produce grain reserves sufficiently large to feed the growing urban labour force. ...read more.

Gosplan worked out a Five-Year Plan. Its main objective was for rapid industrialization, which was to be supported by a socialized agriculture. Stalin called for extreme capital investment, most of which was to go towards heavy industry. He encouraged each village to form a farm. In that way the larger farms could use tractors and fertilisers and be more efficient. But the peasants did not want to collectivise and only 3% did so by 1927. Stalin decided that voluntary collectivisation had failed and set about forcing the peasants to collectivize. By 1936 Stalin, by a combination of incentives and sheer force (a process of starvation and deportations known as dekulakisation) ensured that 25 million small farms had disappeared. In their place were 250,000 collective farms each with its own Communist Party representative as farm chairman. ...read more.