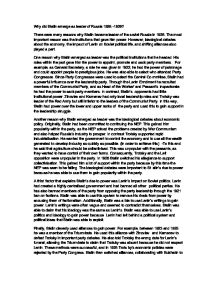 Why did Stalin emerge as leader of Russia 1928-1929? There were many reasons why Stalin became leader of the soviet Russia in 1928. The most important reason was the institutions that gave him power. However, ideological debates about the economy, the impact of Lenin on Soviet political life, and shifting alliances also played a part. One reason why Stalin emerged as leader was the political institutions that he headed. His roles within the part gave him the power to appoint, promote and sack party members. For example, as General Secretary, a role he was given in 1922, he had the power of patronage and could appoint people to prestigious jobs. He was also able to select who attended Party Congresses. Since Party Congresses were used to select the Central Committee, Stalin had a powerful influence over the leadership party. ...read more.

(in order to achieve this) -To this end he said that agriculture should be collectivised. This was unpopular with the peasants, as they wanted to have control of their own farms. Consequently, Trotsky and the Left opposition were unpopular in the party. In 1928 Stalin switched his allegiance to support collectivisation. This gained him a lot of support within the party because by this time the NEP was seen to be failing. The ideological debates were important to Stalin's rise to power because he was able to use them to gain popularity within the party. A third factor that explains Stalin's rise to power was Lenin's impact on Soviet politics. Lenin had created a highly centralised government and had banned all other political parties. He has also banned members of the party from opposing the party leadership through the 1921 ban on factions. ...read more.

Stalin then switched alliances, collaborating with Bukharin to defeat Zinoviev and Kamenev. Stalin ensured that the 1927 Party Congress was filled with his supporters, while Bukharin gave excellent speeches explaining why Zinoviev and Kamenev's policies were wrong. For this reason, Zinoviev and Kamenev were expelled from the party. Finally, Stalin turned on Bukharin. He rejected the NEP and used his support in the party to enforce collectivisation in Russia. In 1929 Bukharin was expelled from the politburo. Stalin used alliances to achieve power because they allowed him to pick off his opponents in turn rather than dealing with all of them at once. In conclusion, Stalin became leader of Soviet Russia through a combination of institutional, ideological, historical and tactical factors. However, the most important factor was institutional. Stalin's roles within the party gave him great influence and allowed him to capitalise on the ideological debates and the structure of the party that Lenin had left behind. ...read more.