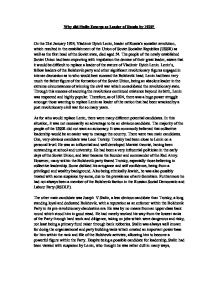 Why did Stalin Emerge as Leader of Russia by 1929?

Why did Stalin Emerge as Leader of Russia by 1929? On the 21st January 1924, Vladimir Ilyich Lenin, leader of Russia's socialist revolution, which resulted in the establishment of the Union of Soviet Socialist Republics (USSR) as well as the first head of the Soviet state, died aged 54. The people of the newly established Soviet Union had been expecting with trepidation the demise of their great leader, aware that it would be difficult to replace a leader of the stature of Vladimir Ilyich Lenin. Lenin's, fellow leaders of the Bolshevik party and other significant revolutionary figures engaged in intense discussion as to who would best succeed the Bolshevik head. Lenin had been very much the father figure of the formation of the Soviet Union, being an absolute leader in the extreme circumstances of winning the civil war which consolidated the revolutionary state. Through this success of securing the revolutions continued existence beyond its birth, Lenin was respected and highly popular. Therefore, as of 1924, there was a huge power struggle amongst those wanting to replace Lenin as leader of the nation that had been wracked by a post revolutionary civil war for so many years. ...read more.

Trotsky argued that a communist revolution in the USSR alone could not succeed because the working class in the USSR was far too small, and the economy was underdeveloped. It was therefore essential that the USSR be joined by other revolutionary states, there was great hopes that Germany would have a socialist revolution, and for a short time after the end of World War I it seemed possible that Germany would embark upon a revolutionary path, but this was repressed by the forces of the right wing in Germany, a major setback for the 'permanent revolution' outlook within the Bolsheviks, similarly the defeat of the revolution in the brief Hungarian socialist revolution of Bela Kun made many within the Bolsheviks see that perhaps a more realistic strategy would have to be developed to defend the USSR. Against this was the desire for Socialism in One Country, the policy put forward by Stalin at the end of 1924. This would mean concentrating on the development and defence of socialism within Russia alone. Stalin was keen on setting an example for other countries to follow and admire. Stalin argued against the idea that 'revolution could be exported' and suggested that revolutions in other countries do not occur when needed by the Bolsheviks, but happened, if at all, only when conditions were right within those states. ...read more.

He instead advocated rapid industrialisation as well as the use of force to make the peasants co-operate. Having advanced a strong defence of the NEP, Bukharin was easily outvoted in the congress of 1929, it having a majority of delegates who supported Stalin's position. Now the main figures of the right wing of the party, Bukharin, Tomsky, and Rykov were removed from the Politburo, giving Stalin and the group around him absolute sole command and power. Stalin had succeeded overall, mainly due to his key position as Secretary of the Party, being able to control the party's structures and procedures, and having control of all information. Stalin was able to be flexible with his policy positions, to be flexible in order to make alliances which would in turn defeat his rivals one by one. Within his own personality, he was easy to underestimate, with the appearance of being dull and unimaginative; he was in fact hard working, determined, and ruthless. Stalin was always underestimated by his opponents, and was able to surprise those standing in his way, with the ability to change his policies entirely in order to eliminate his opponents. Joseph Stalin was now in position to govern Russia, and would so from an era of 24 years, 1929 to his death in 1953. ...read more.