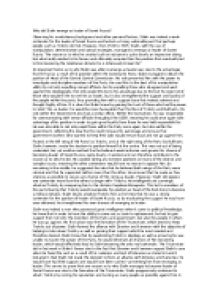 Why did Stalin emerge as leader of Soviet Russia?

﻿Why did Stalin emerge as leader of Soviet Russia? Observing his revolutionary background and other personal factors, Stalin was indeed a weak contender for the leader of Soviet Russia and lacked a strong, admirable past that perhaps people such as Trotsky did not. However, from 1924 to 1929, Stalin, with the use of manipulation, determination and tactical strategies, managed to emerge as leader of Soviet Russia. The reason as to why he created such an outcome is quite clearly an impressive doing, but what really worked in his favour and ultimately acquired him the position that eventually led to him becoming the totalitarian dictator he is infamously known for? An important factor as to why Stalin was able to emerge as leader was due to the advantages that he had as a result of his position within the Communist Party. Stalin managed to obtain the position of Head of the Central Control Commission. His role presented him with the power to investigate and discipline members of the Party. He used this to the best of his manipulative ability by not only expelling corrupt officials, but by expelling those who disagreed and went against him ideologically. Not only would this be to his advantage due to the fact he could rid of those who wouldn?t like to see him as leader, but it also strengthened the support and loyalty of the people within the party, thus providing him with a support base that indeed admired and thought highly of him. ...read more.

This serves to prove that one reason as to why Stalin managed to become leader of Soviet Russia was due to the formation of the Triumvirate. Stalin progressively continued to attack Trotsky by ruining his reputation and turning as many people as possible against him in order to reduce the competition he faced. Another reason as to why Stalin was able to emerge as leader of Soviet Russia was through the takedown and destruction of yet another possible contender- Bukharin. After the Triumvirate split, Stalin tactically formed a Duumvirate with Bukharin who was clearly his next victim of manipulation. He used Bukharin to help him prevent the left wing from seizing control, which not only allowed the left to be attacked, but also lured Bukharin into thinking he had the support from Stalin, which clearly wasn?t the case. Stalin knew that Bukharin was a man of intellect as he was known as the Party theorist, and so he took advantage of this to make up for his lack of authority as an intellectual. Stalin?s use of Bukharin was proven effective at the Fourteenth Party Congress. Bukharin easily demolished Zinoviev?s arguments in favour of world revolution, thus proving the Duumvirate was an effective move in contributing towards Stalin?s victory as leader. Stalin once again used his position as General Secretary to assist them, he was able to appoint the majority of the delegates who attended the Congress, which put his mind at ease knowing they would vote for himself and Bukharin. ...read more.

Moreover, he used the deviousness of his personality to lure people into believing he had formed an alliance with Zinoviev and Kamenev. As well as this, he tactically managed to delay Bukharin?s plane twice. Stalin indeed knew what he was doing; his deviousness was nothing short of impressive and it clearly worked in his favour to gain the power in the end. It was perhaps Stalin?s deviousness that had allowed him to sail to victory. Zinoviev, Kamenev and Bukharin all fell for his tactics and only realised what he was doing when it was too late to alter the outcome; he was a true political figure. To conclude, there are many reasons as to why Stalin was able to emerge as leader of Soviet Russia, but the most important reason is due to the deviousness that he possessed. Had he not been devious in ensuring he remained in the centre of the Communist Party for a large duration of time, or forming a Triumvirate with Zinoviev and Kamenev, and then a Duumvirate with Bukharin, he wouldn?t have accumulated a great deal of success. He was also devious in the way the he used his positions with the Party and government. His high positions enabled him to appoint those who he knew would support him and remain loyal to him, and additionally, expel those who disagreed with him or who he knew would not remain loyal. Stalin was indeed an intellect when it came to tactics and political aspects, and so it is understandable that he eventually emerged as the leader of Soviet Russia rather than the other contenders. ...read more.