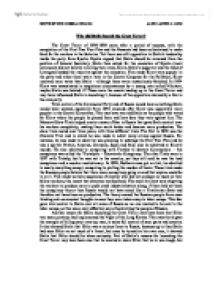 Why did Stalin launch the Great Terror?

Why did Stalin launch the Great Terror? The Great Terror of 1936-1938 came after a period of success, with the completion of the First Five Year Plan and the Peasants had been collectivised to make food for the workers in the factories. Yet there was still opposition to Stalin's leadership inside the party from Ryutin; Ryutin argued that Stalin should be removed from the position of General Secretary. Stalin then called for the execution of Ryutin (most communist did not believe in killing their own), Kirov, Stalin's supporter and the head of Leningrad headed the majority against the execution. This made Kirov very popular in the party and when there was a vote in the Central Congress for the Politburo, Kirov received more votes than Stalin - although these votes mysteriously fanished. In 1934 Kirov was assassinated is suspicious circumstances by a young man called Nikolaev, maybe Stalin was behind it? These were the events leading up to the Great Terror and may have influenced Stalin in launching it, because of the opposition showed by a few in his own party. Total control of the Communist Party and of Russia would have something Stalin would have wanted, especially from 1932 onwards after Kirov was apparently more popular in the Central Committee. This may have worried Stalin as the people who voted for Kirov where the people he placed there and how dare they vote against him. ...read more.

The Mass Purge between 1937 and 1938 was carried out by the secret police, the NKVD who made storm arrests. These arrests hit the party and mainly the Central Committee hard with 110 out of 139 CC members arrested and also in Congress 1108 members out of 1966 members were also arrested - most were killed or put in labour camps. This was very effective in getting all of the old generation out who had voted for Kirov and remembered Lenin's testament and replacing these with young impressionable 'yes' men who believed what they were told. The momentum of the NKVD was increasing and they were making more arrests including upon themselves. The NKVD were split up into two groups and when the other group was falling behind the other in arrests they were accused of being part of the conspiracy and were arrested. The purge ended when the head of the NKVD, Yeshov was arrested and Beria became head of the NKVD. If the NKVD had not made so many arrests then the purge would not have been as ruthless or successful in getting the amount of arrests, which would have meant a new generation could not come through and replace the old entirely or there be enough people in labor camps to keep up crash industrialisation. After what happened with Kirov, Stalin knew that h would face opposition from the Congress unless they were removed and replaced with young people who did not know of Lenin's Testament; so from all the propaganda would have believed that Stalin was really close to Lenin. ...read more.

This personality could have been an overriding factor in why he launched the Great Terror, because he wanted to show these people who had gone against him, who was the leader of the country. Also he may have wanted to show Hitler who was the more ruthless leader, who had total control over his people. If so, then the two reasons go with each other showing Stalin's personality, because he held grudges and wanted total control over Russia to show these people who had gone against him. So if he had been in total control before 1936 and had not faced opposition from Ryutin and Kirov and not been so popular with congress, the Great Terror may not have been launched. Although he still needed a work force and needed the workers to be more productive to ensure the success of crash industrialisation, and he still would have held a grudge against Trotsky, Zinoviev and Bukharin, so he probably would have still gone ahead with the Great Terror whatever the circumstance. Yet the two main reasons were his personality, which gave him that ruthless streak, which demanded total control, the Great Terror was the only way Stalin could have done this with a ruthless act that showed everyone what he really was like and also gave him the complete control of the workforce, army and government. DEPTH STUDY: RUSSIA 1905-1941 ALEX LAYZELL 11CM ...read more.