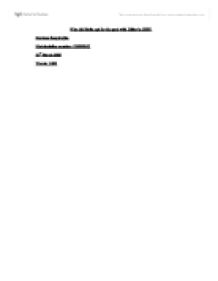 Why did Stalin opt for the pact with Hitler in 1939?

Why did Stalin opt for the pact with Hitler in 1939? Darshan Sanghrajka Matriculation number: 010000962 21st March 2003 Words: 1,900 In August 1939, the Soviet Union and Germany signed the Molotov-Ribbentrop Pact. Why would Stalin opt for a Pact with Hitler, whilst knowing that Hitler had aims to invade the USSR? Soviet historians have argued that Russia simply did not have the military capabilities to defend herself against a German attack and this pact would provide Russia with time to prepare for the inevitable. However, since the opening of the archives in 1989, it is clear that Stalin had other motives, mainly expansionist aims. Although this alliance between the anti-Nazi Soviet Union and the anti-Communist Germany seemed unlikely, there was a long history of cooperation between Germany and the Soviet Union. This essay will aim to show that Stalin did not just opt for the Pact because it bought him time to prepare for an inevitable war but mainly because it provided him with the territory that he wanted and the basis to create a World War, which would destroy capitalism. All three provide us with a more realistic reason as to why Stalin would abandon communist ideology. The Nazi-Soviet Pact included a non-aggression pact and an economic agreement, which committed the Soviet Union to provide food products and raw materials to Germany in return for finished goods such as machinery from Germany. Secret protocols divided Eastern Europe into two spheres of interest, one for the Soviet Union and one for Germany. ...read more.

Pact was signed and he argued that the Pact was inevitable, given the circumstances and the rewards available to the Soviet Union. "It was like a gambit in chess; if we hadn't made that move, the war would have started earlier, much to our disadvantage. It was very hard for us - as Communists, as anti-fascists - to accept the idea of joining forces with Germany."3 Soviet historians argue that "subsequent events revealed that this step was the only correct one under the circumstances. By taking it, the USSR was able to continue peaceful construction for nearly two years and to strengthen its defences".4 This was no doubt a motive behind Stalin's decision but as mentioned, there was greater reasoning behind such a move. After 1989, when the Soviet archives were opened up during Gorbarchev's period of Glasnost, historians have been able to delve deeper into answering this question. With respect to these other motives, Viktor Suvorov, a former Soviet army officer, challenges the Soviet historians and argues that the Nazi-Soviet pact was actually part of Stalin's Marxist strategy for revolutionary victory in Europe. Marx had argued that conflicts between Capitalist nations would create an opportunity to transform the war into a class war and establish socialism. Of course, he still advocated Socialism in one country but he also believed that revolution would occur eventually. In December 1927, Stalin announced that capitalism had become unstable and argued that the "world economic crisis will turn into a political crisis in a number of countries"5 Therefore, the idea was to wait for this to occur, whilst also industrialising and rearming the country. ...read more.

Therefore, it is a more realistic portrayal of Stalin and disproves Soviet historians who have argued that the Pact was solely, a temporary and necessary measure to delay the Germans until Russia was militarily strong. Two aspects of the Pact support the argument that Stalin had expansionist aims in Eastern Europe; first, the dealings with the Baltic states and secondly, Lithuania. The Soviets had been insistent about gaining the Baltic states in the early negotiations with Britain and France, however only Germany could offer them to the USSR. The negotiations with Lithuania show that Stalin actively aimed to broaden Soviet borders. On 10th January 1941, Germany and the Soviet Union signed another protocol, in which USSR would pay Germany, $7,500,000 for Lithuania. The secret protocols had all been demanded by the Soviets rather than being offered by Hitler. This theory is also supported by events after the Pact; The Soviets wanted Finland to sign a similar pact to the ones signed by the Baltic states. However, Finland refused and the Red Army invaded it on 29th November. The motive behind the Pact was to regain pre-World War 1 territory rather than simply buying time. In conclusion, Stalin's act of realpolitik allowed him time to remodel his arm from an defensive archaic one to a offensive force. "Of course, it's all a game to see who can fool whom. I know what Hitler's up to. He thinks he's outsmarted me, but actually it's I who have tricked him." This is Stalin's explanation for opting for the Pact, to Lavrenti Beria, his Commissioner for Internal Affairs. ...read more.