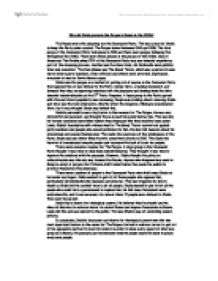 Why did Stalin promote the Purges in Russia in the 1930s?

He was very distrustful and paranoid, and thought those around him would betray him. This was why his former comrades were killed rather then disgraced like they would've been under Lenin. Stalin's fascination with violence lead to The Great Terror carried out against party members and people who caused problems for him. He also felt insecure about his educational and peasant background. This made him suspicious of the intelligence of the Party. Stalin was also bitter when his wife committed suicide in 1932. This made him have lot of resentment towards people and increased his lack of trust for people. There were economic reasons for The Purges. ...read more.

He felt many Communist were untrustworthy and it was necessary to remove them. If people were disloyal to Stalin, they could be purged. Stalin had a desire for ideological control. He believed that he should use the ideas of Marxism to enforce terror to control Russia and impose Communism on Russia. Lenin did this and was adored by the public. This was Stalin's way of controlling Lenin's policies. In conclusion, Stalin's character and desire for ideological control were the two most important factors in the cause for The Purges. He had to enforce terror to get rid of his opponents and had to have full control in order to know every aspect of what was going on in Russia. His paranoia and resentment towards people made him want to purge even more people. ...read more.